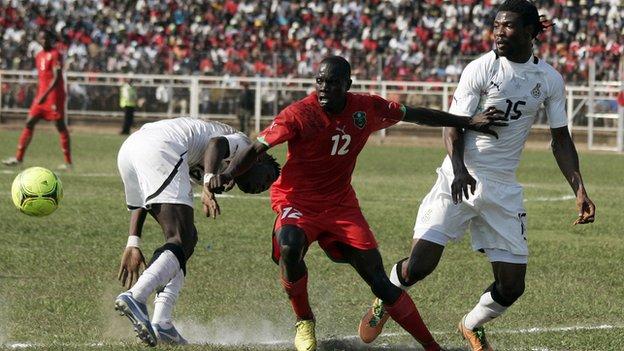 Ghana's 2013 Africa Cup of Nations campaign is threatening to implode before it officially begins.

The Black Stars will be chasing their first Nations Cup title since 1982 when they take part in next year's tournament in South Africa and the Ghana Football Association has presented proposals for a bonus package that has fuelled anger among a section of the country's population.

It has triggered a debate about the role of money in international football and the topic is also dominating newspaper pages and providing a hot subject for the country's powerful sports radio talk show.

In the proposed budget, the Ghana Football Association is asking for $7.7m for the competition in South Africa that will cover all expenses of the team, including match bonuses and allowances.

Each player and official would earn $87,520 if Ghana win their fifth Nations Cup title.

In a country where salaries are generally low, the amount of money Ghanaian players earn on international duty is beginning to cause resentment, with other professional bodies having threatened strike actions in the past when the bonus package of the Black Stars has been made public.

Bonuses have traditionally been a touchy subject, not only in Ghanaian football, but across football on the continent generally. It has caused tension in Cameroon and upset what should have been Togo's memorable World Cup debut in 2006 in Germany.

Ghana FA president Kwesi Nyantekyi says he has gained a lot of experience from dealing with the bonus issues since the 2006 World Cup and he has been strong in his defence of the players, insisting their motivation is not money but patriotism and national pride.

Nyantekyi also argues that it is wrong for people to compare what the players earn on international duty with the general public's salary structure because football's pay structure is completely different.

"If you want to compare what a player earns with what the head of state earns, nobody earns as much as players earn," he told BBC Sport. "This will always become a problem in a third world country where salaries are generally low.

"We have to understand the peculiar nature of football. We are living in a world which is dictated by the forces of demand and supply and in that industry that is how it plays out."

"They [the players] are human beings. They are not difficult and don't want to just line their pockets and so some of the comments you hear in the media about how players are selfish and want to build their wealth from the public purse is not accurate."

However, critics say the bonus expectations of players and officials is unreasonable and out of tune with the general economic climate in the country.

"Whatever happened to our sense of nationalism? Does it matter no more serving the nation unless one exacts money like a mercenary? Someone ought to inculcate in our current crop of players the true spirit of nationalism and selflessness to the nation", said Ghanaian football commentator Kwabena Yeboah.

Members of the Black Stars have been silent on the matter. But Nyantekyi recalls that at the 2012 Nations Cup, the Ghana FA held seven rounds of meetings with the players before coming to a settlement on a bonus package for the side.

The players have in the past based their case on a simple premise; they do a job with a short lifespan and whether for club or country, they expect to be paid adequately for it.

And with many stories of how prominent ex-internationals who won major honours for Ghana have fallen on hard times without much support from the state, the thinking is to make hay while the sun shines.

But Nyantekyi disputes the claims that the players and officials are acting like mercenaries who view the opportunity to represent Ghana at the Nations Cup as another chance to make money.

"We do not believe money is everything but we have to appreciate that it is very important", he said.

"It doesn't decide everything but it is very important. At any point we don't pay what the players demand and yet based on the inculcation of the virtues and the principles of patriotism which they imbibe it sobers them and they understand it not just about the money.

"Otherwise they may take the money and not perform to expectation. Most of the players earn more than what we pay them as bonuses so if it was the money alone, they will not even come."