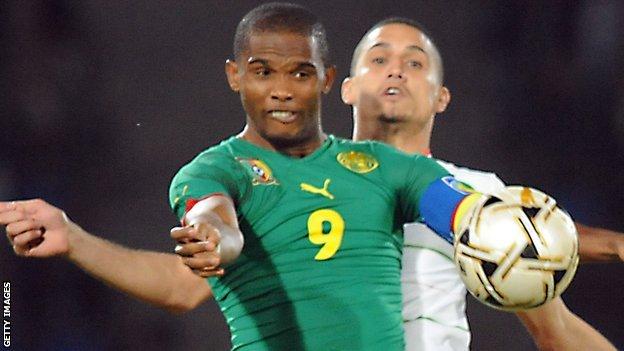 Cameroon captain Samuel Eto'o has called on his country's team to forget recent failures and bounce back.

The Indomitable Lions were knocked out of qualifying for the 2013 Africa Cup of Nations by Cape Verde last month and will miss a second consecutive finals.

And the extent of Cameroon's fall is shown in the Fifa world rankings - they were 11th in 2009 but are now 62nd.

"We should draw lessons from our mistakes of the past, recover, heal our wounds and move forward," said Eto'o.

I believe deeply that failure can be the foundation of success

"The failures we have experienced in recent years have been a huge frustration but that's life, with its moments of joy and also its moments of sadness."

Once a force in African football, Cameroon have lost form in recent years, to a chorus of consternation in the central African country.

Eto'o, himself, had refused to play in the first leg of the Nations Cup qualifier Cape Verde, who won 3-2 on aggregate, labelling the set-up around the team amateurish.

And last year, he led a boycott of a friendly against Algeria in a row over unpaid bonuses.

But Eto'o, who was speaking in an interview with the official daily Cameroon Tribune on Wednesday, is back in the fold and is confident Cameroon can turn their fortunes around.

"I believe deeply that failure can be the foundation of success. We must build on these frustration to find the strength necessary to bounce back," added the 31-year-old striker.

"The Indomitable Lions are one big family. The players realise the responsibility to the people of Cameroon. It's our duty to live up positively to the expectations. I think we are in the right direction."

Cameroon must now set their sights of qualifying for the 2014 World Cup in Brazil.

They have three points from two matches in their qualification group and next play Togo at home in March.