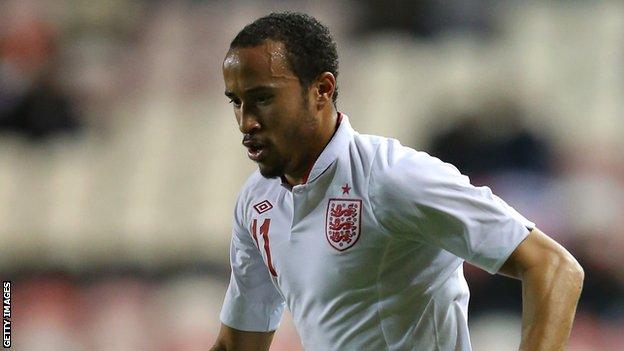 Andros Townsend hopes he can force his way into England Under-21 manager Stuart Pearce's plans for next summer's European Championships.

The 21-year-old Tottenham winger made his full debut for the side in the 2-0 win over Northern Ireland on Tuesday.

He told BBC Sport: "I just wanted to make an impression and put a thought in the manager's mind come the summer.

"I am a bit unfit but I showed glimpses of what I can do. Hopefully if I am given a chance I can impress further."

He was then an unused substitute in the return leg when England secured qualification for the tournament, which will be held in Israel next June.

He added: "I was delighted to be given my first start. It's a real honour.

"I came up through the age groups at Under-16, Under-17 and Under-19 but went out of the picture for a few years.

"I'm delighted to be back, I love pulling on my country's shirt and I want to do it a few more times.

"It's all about what the manager thinks and hopefully he wants to see me in future squads."

Townsend, who operates on the left wing, has scored one goal in seven appearances for Spurs this season.

However he is yet to start a Premier League game and the youth team product, who has had eight loan spells away from White Hart Lane, is hoping to continue his development in order to be involved more in the first team.

"Any time I step on the pitch it's all about getting fitness, confidence and showing people what I can do," he continued.

"Hopefully between now and the end of the season I will have more chances to do what I can do.

"I've been learning to come inside and use my right foot and try and get goals on my weaker foot to make myself a bit unpredictable.

"I've got to work on that a bit more and hopefully it can start coming off for me. I've got to keep playing well when given the chance."