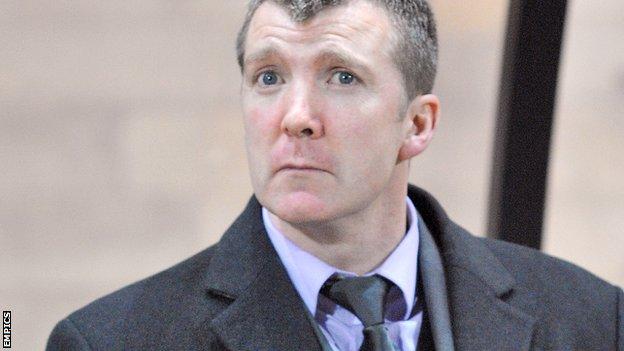 Jim Gannon is the man to lead Stockport County back into the Football League, according to captain Joe Connor.

Connor told BBC Radio Manchester: "He's very passionate about the club and he expects a lot from the players.

"He's a real thinker and he's got a five-year plan. I think we might be able to push for the play-offs this season, but he's thinking it will be a couple of years yet."

Jim Gannon guided Stockport County into League One in 2008, but he left Edgeley Park a year later, and by 2011 County were a non-league club

The defender continued: "I think he's the man to take Stockport back into the league."

In his first spell as manager, Gannon led Stockport to promotion into League One in 2008.

He left the club a year later and went on to have spells at Motherwell, Peterborough and Port Vale before returning to Edgeley Park 12 months ago.

While he was elsewhere, Stockport's on-field fortunes were severely affected by their financial struggles and they suffered two relegations in three years.

The Hatters are currently 12th in the Blue Square Bet Premier, in their second year at non-league level.

"We're digging in, working hard and learning the game. We're mid-table at the moment but hopefully we'll get a few more wins and get towards a play-off position."

Connor was named as the non-league player of the year at the North West Football Awards on Monday.