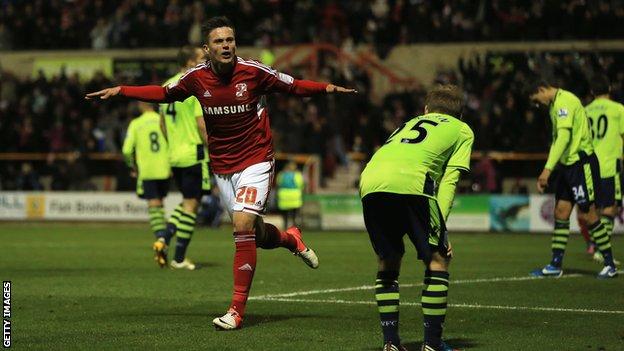 The 18-year-old striker came through Town's academy and has broken into the first team this season.

He has scored three goals in seven appearances so far - including two against Aston Villa in the League Cup - and made his England Under-19 debut against Finland on Tuesday.

"It has been a rapid rise - it's happened so quickly - but it's down to his hard work and his ability.

What a great experience that was. The last couple of days have been great and today topped it off - I want more now

Miles Storey on Twitter after his England Under-19 debut

"He's got great pace, that's the most eye-catching thing about Miles. He's also got a natural ability to beat the opposition and that's a stand-out attribute."

West Bromwich-born Storey started his career at Wolves before switching to Coventry then Swindon.

It was Bodin who handed the young forward his debut for Town in the 2-0 defeat by Oldham on 30 April 2011 during a spell as caretaker manager.

Since then, he has made one start and 10 substitute appearances.

Storey was initially placed on standby for the England U19 squad for Tuesday's game but played 60 minutes in their 1-0 victory at Telford's New Bucks Head Stadium.

"It was a good experience," he said. "I really enjoyed it and I hope there will be more.

"It's been a bit of a crazy month but I don't need to stop here. I want to keep on trying to develop as I'm nowhere near being a player yet.

"I'm back to training now and I just want to crack on."