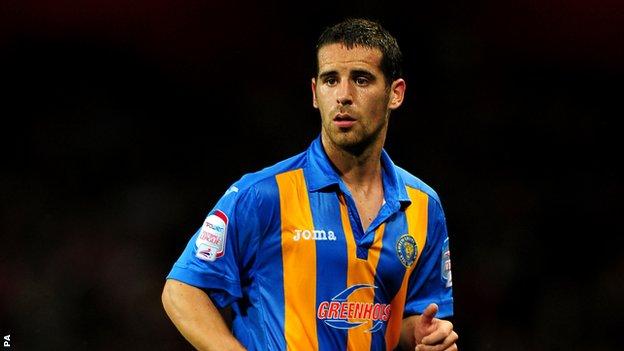 The 25-year-old signed an eight-week contract with the League Two club on 9 November.

"At the moment it's just until January - hopefully I'll get some time on the pitch," he told BBC Radio Stoke.

"I have no worries that once I get the opportunity to show what I can do, I can get tied down to something more long-term."

Obviously playing for someone like Micky [Adams] is attractive to any footballer, and hopefully we can work well together as a team and get into League One.

He continued: "It's not a great feeling when you've only got two months and I don't want to be in the position where I've been the last few months.

"So if the opportunity comes then I'm sure I'd enjoy that.

"There's quite a bit of competition in midfield so I need to be working as hard as I can and once that opportunity comes, I hope can keep my place."

McAllister had been without a club after his release from Shrewsbury in May, following the club's promotion to League One.

And the former Sheffield Wednesday academy graduate admitted he became so frustrated at being without a club, that he contacted Vale manager Micky Adams directly to try and capitalise on an injury to fellow midfielder Doug Loft.

"I had an agent but it didn't seem to be working out, so I decided to take it upon myself," McAllister said. "I saw Loft got injured so I gave the manager a ring and he asked me to come down.

"It was a lot harder [to be unattached] than it thought it would be. Obviously I have experience in the Championship and got promoted last season.

"So I thought that would be a good basis to find a club, but it was unbelievably tough.

"Obviously playing for someone like Micky is attractive to any footballer, and hopefully we can work well together as a team and get into League One."