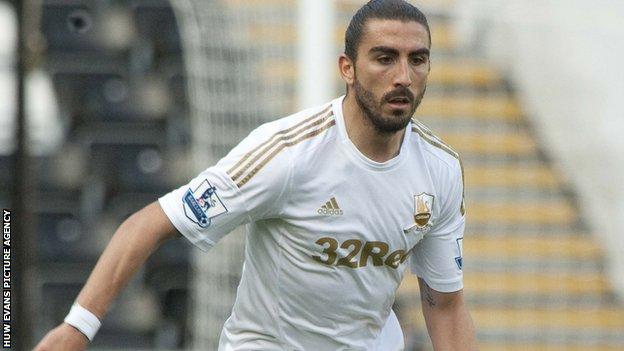 Swansea City defender Chico Flores will return to full training this week and hopes to be fit for Saturday's visit to Newcastle United.

Flores has missed the last two Premier League games with a thigh injury after limping off in the Swans 3-1 Capital One Cup victory over Liverpool.

"I'm still feeling a bit of pain, but it has improved a lot," said 25-year-old Spaniard Flores.

"I am hoping to return to full training on Thursday to see how it reacts."

The £2m summer signing, who scored the opening goal at Anfield, has established himself as a first-choice at centre-back since joining from Italian side Genoa.

Garry Monk took over in his absence for the 1-1 draw with Chelsea and Southampton.

Flores added: "Like all players, I want to play week-in, week-out, and I am not the type of person who likes to leave the field with an injury.

"But I just couldn't carry on at Liverpool; it was too bad. I thought I would recover after three or four days, but it just got worst and has dragged on.

"It was particularly disappointing because I thought I was at a good level after coming back from suspension. I was feeling comfortable on the pitch and with the team.

"The injury is a blow, but I hope to be fit and performing well again soon, hopefully at Newcastle on Saturday.''

Meanwhile, goalkeeper Michel Vorm, who picked up a groin injury against Manchester City on October 27, expects to be back in action by Christmas.