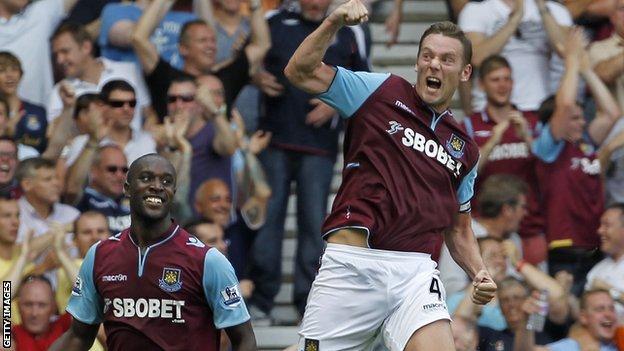 West Ham co-chairman David Gold takes a deep breath as he ponders the question - what was the club like when he and business partner David Sullivan took over nearly three years ago?

"I dread to think back. We had serious debt issues, the club was close to administration. Had we not done the deal the incumbent owners would have had nothing else to do than sell three of their best players," he said.

Last Sunday seemed a world away as victory at Newcastle pushed the Hammers to sixth in the Premier League in their first season since promotion via the play-offs.

"I have to confess we would not have taken on any other football club in that financial state," said lifelong Hammers fan Gold.

"If you have got a serious debt that is harming the club and you are making cuts all around, it's a negative.

Midfielder Mark Noble, who has been at the club since he was 11, says there is a happier feel now.

"It was sort of all over the place. They've come in, settled the place down and brought in a top experienced manager in Sam Allardyce. The place needed a bit of stability and the club are seeing the benefits on the pitch," he said.

Noble, 25, and 76-year-old Gold may be half a century apart in years but they are cut from the same claret and blue cloth. Local lads who grew up supporting the side.

They both point to the influence of Allardyce, an appointment in the summer of 2011 which was not universally accepted by fans of the so-called 'Academy of Football' worried about his perceived long-ball game.

"His man management is second to none," said Noble.

"Sam likes his teams to be organised and every detail to be bang on and that's making the difference. We are keeping clean sheets, we are working hard as a team and are hard to break down. It's enjoyable to be out there at the moment."

While statistics show West Ham have played a relatively high percentage of long balls, many fans have warmed to Allardyce.

"The supporters are generally happy with the progress of the team and the kind of football being played," said Graeme Howlett, editor of supporters' website Knees Up Mother Brown.

"In the 1966 World Cup final, Bobby Moore played a 60-yard pass on to Geoff Hurst's toe for England's fourth goal and I don't recall too many people complaining about that.

"Sam Allardyce is doing a good job with one of the best squads we've had for many, many years, and he's adaptable, changing tactics when necessary."

Noble talks of Allardyce's attention to detail, analysing opponents' strengths and weaknesses, and targeting free-kicks, corners and throw-ins as areas to focus on.

"He reminds us every weekend how many goals are scored from set-plays, free-kicks and corners. He likes to nail them down and it's made a huge difference to us over the last two seasons," said the club's longest-serving player.

"I know the manager gets labelled with the long ball. He tells me every game to get on the ball and make us play and he's never ever told me to just get the ball and boot it.

"Some of the passing against Newcastle, Manchester City, Southampton and QPR was brilliant where we played on the floor."

West Ham's new owners sacked Gianfranco Zola and Avram Grant as managers in their first 18 months at the club and Gold said he studied videos of Allardyce's former sides before appointing him.

"Once we were relegated, we knew Sam was our main target because we knew what was lacking at the football club, particularly at the training ground, I recognised it, and that was discipline. There was no discipline, there was a lack of camaraderie. There was some, but it was fragmented.

"You needed a man with a bit of steel about him. There was a concern, and fans made it clear to us, that he plays the long ball game.

Noble on his West Ham debut

"It was a strange old situation. It was a surprise to come on and I'd just turned 17 and couldn't even drive. I took my boots to the game but the kit man took them back to the training ground so I felt like half a professional. I walked the two miles home in my suit - it looked like I'd just finished a day's work in London."

"When you looked at the DVDs of when he was at Bolton, Newcastle and Blackburn, I didn't see this long ball game. What I did see when he was losing 1-0 with 10 minutes to go was a barrage of long balls, but then I saw it from Barcelona - they hump it into the box, it's human nature. There's a lot of great football coming from Sam."

Gold said captain Kevin Nolan, who dropped down a division to team up again with his former Newcastle boss Allardyce in the Championship, has been the lynchpin in West Ham's success.

"Nolan is probably the best captain I've had in my 20 years in football. He's certainly as good a captain as Steve Bruce at Birmingham, if not better," said Gold, who was at St Andrew's for 16 years.

"He's not just a captain on the field but also in the dressing room, on the training ground, in the dining room. He encourages, he leads by example."

Midfielder Nolan has teamed up with former team-mate Andy Carroll, and West Ham hope the striker will stay until the end of the season despite a loan deal which gives Liverpool the option of recalling him in January.

"I'm hoping things stay as they are because there's no doubt the relationship between Andy Carroll and Kevin Nolan is a strong one. Although Andy isn't scoring the goals, Kevin is. They play off each other and Kevin is benefiting from Andy's presence," said Gold.

"Andy Carroll is a big strong man, and the relationship between him and Kevin Nolan on and off the pitch has been really special."

"We've had a great start. I think the target is not to get sloppy and think we've done enough already," he said.

"Look at the likes of Everton and clubs like that who are in about eighth, seventh, sixth every season.

"We have got the foundations to be a top eight team and I think that will be the main goal of me being at the club. To win a cup would be fantastic."

Many of Noble's friends are West Ham supporters and he senses an enthusiasm among them.