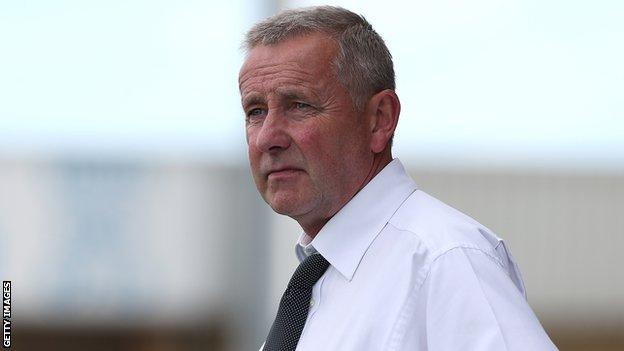 Holdsworth takes charge of the Shots for the 100th time this weekend with his side bottom of the Football League.

He told BBC Surrey: "It'll be a good learning curve for Dean because every manager goes through bad times.

"The Aldershot Town board and fans are very loyal. I think he'll get them out of trouble."

Brown, who spent five years managing the Hampshire club in the mid 2000s, added: "If I look at what Dean has done in his managerial career, he's gone from one success to another.

"He started off at a low base and went to Newport County and did incredibly well.

"Managing in League Two is a fantastic grounding for any young manager. If you do well in League Two on a small budget chances are you'll be really comfortable at any level above that."

The Dons, who sacked Brown in September following a poor start to the season, lie just four points above the Shots in 21st place.

"Both sides at this time last year were doing well," Brown said.

"That's not the case this year and I think that makes it a more important game."

Brown says the ambition of both clubs is hampered by their finances.

"Both clubs have a very similar budget. I'd guess Aldershot's is slightly bigger but they are around the same mark - the lower end of League Two.

"It puts more pressure on the managers to make the right decisions on loans and new signings.

"Is it possible for either club to move up a level?

"Dean showed that last year with a fantastic run of results.

"Once [AFC boss] Neal Ardley gets his own men in he will have expectations of pushing for League One.

"If I look at the top teams in the league, they've all got more money than Aldershot and Wimbledon.

"It's difficult but it can be done. I'd cite Cheltenham and Torquay as role models."

Should both sides still be in a relegation battle come May, Brown says either side could struggle if they dropped back in to non-League.

"I think both clubs, especially with what they've gone through to get where they are, would find it incredibly difficult," he said.

"Would they bounce back? You could not guarantee it for a minute.

"You've got Luton and Wrexham who are massive clubs who have struggled to get out of the division.

"It wouldn't be a fatal blow as both clubs have proved they have got die-hard supporters. But boy, it would be a bitter blow to both clubs."