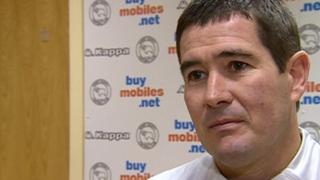 Derby County manager Nigel Clough tells BBC East Midlands Today it is "inevitable" that 17-year-old midfielder Will Hughes will attract interest from Premier League clubs but says they have not had any offers.

Hughes, who became the second-youngest player to represent the England Under-21 side when he came on as a substitute in Tuesday's friendly against Northern Ireland, has reportedly attracted interest from Manchester City, Liverpool and Arsenal.

Clough says a host of scouts have been to watch Hughes but insists they want to keep him at Pride Park and are under no pressure to sell.

Scottish Premiership: Hamilton 1-1 Aberdeen - can either side find winner?