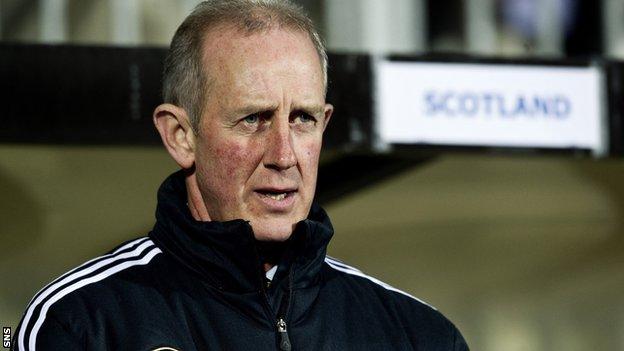 Scottish FA chief executive Stewart Regan wants the new manager to be in place by March and has been impressed by Stark.

"The statement came out last night and I'm happy with that," Stark told BBC Scotland.

"I'm delighted to continue to be interim manager at the moment."

Gordon Strachan, Joe Jordan and Owen Coyle have all been linked with the post since Levein was sacked with Scotland bottom of World Cup qualifying Group A.

Under-21 coach Stark guided Scotland to victory in in the Stade Josy Barthel.

"For me, it's not easy winning international games and they produced the result we all wanted," Stark said.

"We're all human and all like people to think you're doing a good job. So, I'm looking no further, I've been asked to take it, we've negotiated the week and I'm really delighted."

Regan said the aim was to appoint a manager who can restore the national side's "respectability and status" and qualify for the 2016 European Championships.

Regan added: "Billy has impressed us greatly by the way he has conducted himself in the role."