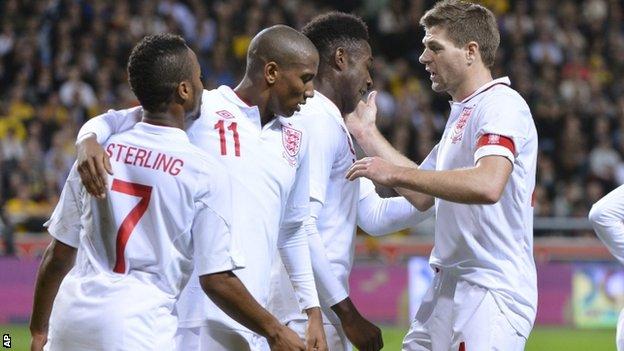 Zlatan Ibrahimovic's tribute to technique, athleticism and sheer natural talent - all in the space of a few seconds - means England's 4-2 friendly defeat in Sweden will never be forgotten.

For those of us who have watched and wondered when previously witnessing this enigmatic genius in action, his acrobatic, instinctive, outrageous, overhead kick from 30 yards was the moment any remaining doubters knew what the fuss was about.

The debate about whether this was the greatest goal ever scored began almost as soon as the ball flew past goalkeeper Joe Hart, with former England manager Graham Taylor instantly announcing in Stockholm that it was the best he had seen in the flesh.

Former Bolton midfielder Fabrice Muamba: He might be arrogant but Zlatan Ibrahimovic is a problem to any team he play against.

Marseille midfielder Joey Barton: If only the English FA could have given Ibrahimovic a cap or a run out before those pesky Swedes nabbed him...

Tottenham winger Aaron Lennon: Buzzing for Caulks and Huddz, also congratulations to Stevie G on 100 caps #legend, but what a performance by #Ibrahimovic

England manager Roy Hodgson is a keen student of the game and, amid the pain of defeat, will appreciate the quality buried within a strike that made Ibrahimovic the first man to score four in a game against England - but his mind will soon turn to more pressing questions closer to home.

Hodgson returned to a country where he is still widely respected for his coaching feats with Halmstads BK and Malmo with experimentation on his mind and an eye on England's future.

So what will he have learned from an England XI that was, for the large part, a group of relatively inexperienced internationals and debutants given the chance to make a mark?

Hodgson was certainly satisfied with much of what he saw, despite the scoreline, saying: "I thought it was a good performance. I took the risk to give debutants a chance, obviously that will open things up and I was hoping we'd hold out.

"Ibrahimovic scored a wonder goal to put the icing on the cake, but for large periods of the game I can be more than satisfied. Many players who got a chance came out with great credit."

and did more than enough to confirm the rich promise of his performances this season and his temperament for international football.

He may have played a part in Sweden's first goal with a cheap concession of possession but more than made up for it with a willingness to be positive, a determination to take the direct route to goal and a very obvious refusal to shirk a physical challenge.

Fourteen years older and at the other end of his career, Everton's Leon Osman was another who will have made a favourable impression on the manager.

The midfielder grew into the game, keeping possession sensibly and showing quick feet and the sense to make a series of significant incursions into the Sweden penalty area after the break. He will feel he has done enough to justify his inclusion and warrant another chance from Hodgson.

Tottenham defender Steven Caulker was given a crash course in the need for awareness at all times when faced with a threat such as Ibrahimovic but gave the impression of a quick learner - and a goal on his debut made this a night the 20-year-old will cherish.

He left the action with England leading 2-1 to allow a 16-minute debut for Stoke City's Ryan Shawcross, who was unfortunate enough to run headlong into the ruthlessness of Ibrahimovic as he made it the perfect opening night for Stockholm's Friends Arena.

Shawcross switched off just long enough, a couple of seconds, for Ibrahimovic to steal in and volley an equaliser. England, who had looked in control until a series of perfectly understandable substitutions from Hodgson, were suddenly under siege and the Stoke defender was caught in the crossfire.

One youngster who left Sweden with his England reputation further enhanced was Manchester United's Danny Welbeck, whose goal made it five from five shots on target in his 14 internationals.

The experimental nature of Hodgson's starting line-up was reflected in the fact that only four players had more caps than Welbeck. He responded with another mature, rounded performance.

There is the lingering sense that Hodgson is still searching for the striker to complete his attacking strategy alongside Wayne Rooney and his Old Trafford team-mate makes a more compelling case with every appearance.

He is one of the new breed but has always looked a comfortable England fit. Once more he scored with expertise, showed great awareness and an ability to hold the ball up. Welbeck has all the parts that make the identikit international forward.

The irony, of course, is that as he becomes more integral to England's plans he has to fight even harder for game time at Manchester United since Robin van Persie's arrival.

England goalkeeper Hart has deservedly won his share of plaudits but this was a not a game he will recall with any affection.

Looking uncomfortable almost from the first whistle, Hart should have done better with Zlatan's third goal, a free-kick from very long range - and while it may seem churlish to inject a note of criticism into a moment of sporting magic, it was his poor headed clearance that allowed Ibrahimovic to score his goal of a lifetime.

Hodgson's focus will be on other matters when the applause for Ibrahimovic dies down.

While that goal will steal all the headlines, England's manager was left with plenty to think about on the journey out of Sweden.