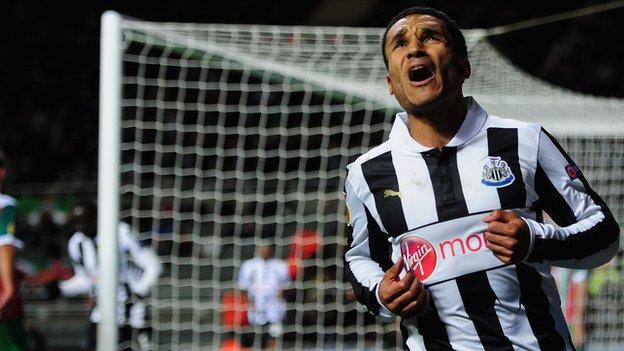 Sylvain Marveaux's first goal for Newcastle earned the Magpies a draw against Maritimo to secure their place in the last 32 of the Europa League.

The French winger struck in the 23rd minute by collecting Hatem Ben Arfa's pass and slotting the ball through goalkeeper Romain Salin's legs.

But the Portuguese side snatched an equaliser when substitute Fidelis fired an angled drive past Tim Krul.

Ben Arfa damaged his hamstring and is likely to miss Sunday's game at Southampton, while Cisse suffered a kick to his thigh but could feature at St Mary's.

Their injuries will only increase the headache manager Alan Pardew is having to deal with as he tries to marshal a team that is winless in five games in all competitions and struggling to cope with a mounting injury list.

Pardew came into the game with almost a full team missing through injury and suspension.

Influential midfielder Yohan Cabaye has had surgery on his damaged groin whilst defender Ryan Taylor and midfielders Dan Gosling and Haris Vuckic are already out with long-term injuries.

Even with a depleted line-up Newcastle were expected to beat a Portuguese side yet to take a point or score a goal away from home in the competition.

In front of a crowd of just 21,632, left-back Davide Santon forced keeper Salin to make a hurried save but the Magpies looked laboured until Marveaux injected some excitement into the match.

Ben Arfa found the winger on the edge of the box and he burst forward before rolling the ball through Salin's legs.

Frenchman Ben Arfa had been the orchestrator of Newcastle's few bright spots but he was forced to limp off in the 40th minute with Demba Ba replacing him.

Cisse was then withdrawn from the fray in the 50th minute and the pair's absence had a negative effect on Newcastle and encouraged their rivals.

Tim Krul was tested by a fierce 53rd minute effort from Danilo Dias that he pushed over the bar before Sami later headed wide.

The keeper was in action again to glove a Ruben Ferreira volley to safety as the visitors tried to find the victory they needed to keep their own qualification hopes alive.

The pressure paid off when sub Fidelis scored an equaliser with 11 minutes left.

Skipping past Steven Taylor, he drilled a low shot underneath Krul to become the first away player to score at St James' Park in the Europa League this season.

The Brazilian striker nearly struck an injury-time winner with a far-post volley which bounced wide, to the relief of Krul.

The draw means Newcastle are still unbeaten in Europe this season. They play Bordeaux in their final group game with the winner certain to top the group.