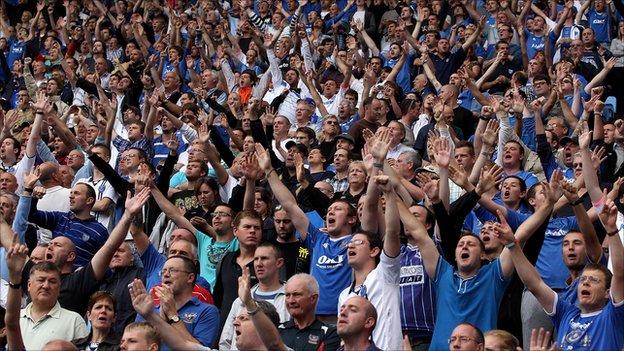 The Pompey Supporters' Trust hope to take over Portsmouth before Christmas after signing a conditional agreement with the club's administrators PKF.

"So the sale has to be conditional on receiving the Court's permission to sell the ground."

The PST have offered Chainrai £2.75m for the ground but following his refusal to sell, Birch will now go to the High Court of Justice and ask for Chainrai's fixed charge to be released forcing him to sell at the market rate.

"We are therefore in the process of submitting an application to the Court," continued Birch

Who are the Pompey Supporters Trust?

Supporters: Hundreds of Pompey fans who have pledged a minimum of £1000 to buy a stake in the club.

But he said: "We can confirm that we have signed a sale agreement with the PST to acquire the business of Portsmouth Football Club."

The financially-troubled club have been in administration since February and are said to be around £61m in debt.

Former owner Chainrai, who is owed around £17m by Portsmouth, called a halt to his attempt to buy the League One club in November, after trying to assume control via his company Portpin for a third time in less than three years.

"I'm sure every member of staff, every player and every supporter will join with me in wishing to see a speedy resolution of what has been a protracted administration," Birch added.

"Everyone involved in the transaction has worked incredibly hard to get the deal to this stage and, although there is still much that needs to be done, today's announcement marks what is hopefully the beginning of the end of the process."

The news was welcomed by the PST chairman Ashley Brown who called the moment "a special day for the club".

"This truly is fantastic news and the start of a new chapter for Portsmouth Football Club," said Brown.

"We hope to finalise the sale by Christmas, and go into 2013 with a fresh start for our great club.

"The hard work will continue during the court application process to ensure that we are in the best position possible to drive the club forward and build for the future ahead of the important January transfer window."

However, in a statement issued to BBC Sport, Chainrai said he still believed his offer for the club was the best offer for creditors and Portsmouth Football Club.

"We remain ready to complete the deal in a matter of days, should the Trust be unsuccessful," said the statement.

"That is our intention and, despite ill-informed gossip to the contrary, the Football League have not rejected our application.

"We have satisfied the Football League regarding our business plan and cash requirements and we have answered all other questions regarding the Owners and Directors' test."

The statement also criticised the decision by the PST to work with property developers.

"The Trust's bid is conditional on securing a deal to flip Fratton Park and sell it to property developers.

"The money raised from that sale is vital to fund their bid and yet the rental agreement will ratchet up costs and put the club under more pressure every year that goes by.

"We believe that keeping Fratton Park under the ownership of the club - which our bid guarantees - is of paramount importance to the future of Portsmouth Football Club if it is to remain at the heart of the community."