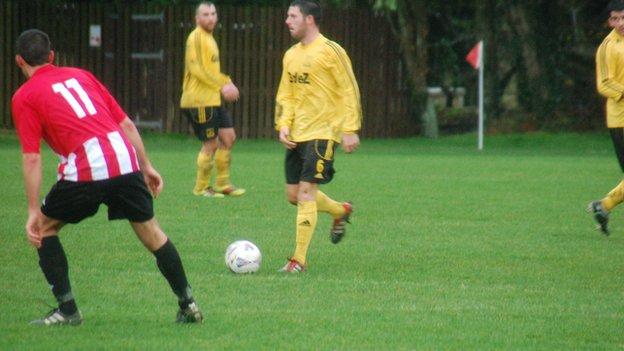 St Paul's beat Jersey Wanderers 4-2 to move above them in the Premiership table and into second spot.

Luke Watson's header put St Paul's on their way before Jack Cannon's penalty made it 2-0 at the break.

Jean-Pierre Mbeke got Wanderers back into it but Watson grabbed his second soon after.

Jamie Mourant's free-kick was fumbled in by Garry Lloyd to give the hosts hope but Craig Russell struck to seal the win.

"I thought we were the better side in the first half and we should've scored three or four more goals," St Paul's boss Martin Cassidy told BBC Radio Jersey.

"I didn't think we were going to lose the game but I just would like us to see games like that off.

"We did create chances and on another day we could've won that by six or seven goals.

"I don't want to be disrespectful to Wanderers because I thought in the second half their young boys played absolutely brilliantly."

The only other scheduled top-flight game in the island on Saturday, between strugglers St Ouen and St Peter, was postponed because of an unplayable pitch.

The Championship match between promotion-chasing St Clement and Trinity was also a victim of the wet weather.

Elsewhere a brace from Dominic Glennon helped First Tower United to a 5-0 win over St Martin, while Magpies stay bottom after a 3-0 defeat at Sporting Academics.

In the other second-tier match Beeches Old Boys lost 4-3 at St John despite a hat-trick from Simon Logan.