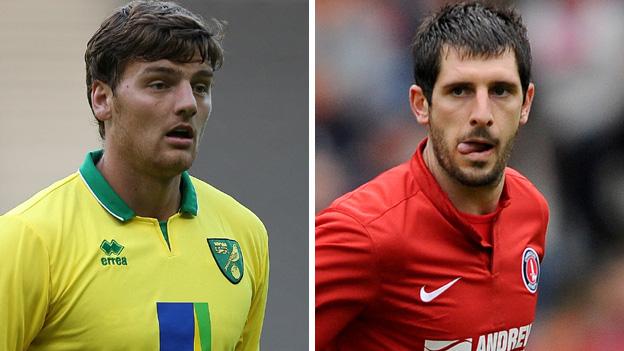 Canaries academy graduate Martin, 24, has struggled to secure a regular first-team place with the Premier League club this term and has made only three appearances.

The forward has previously had loan spells at Crystal Palace and Luton.

Hollands, 27, has been with the Addicks for 18 months and has played 14 games so far this season.

He started his career at Chelsea and had a short loan spell with Torquay before leaving Stamford Bridge to join Bournemouth, where he spent five seasons.

"Charlton have adopted a different formation and maybe I haven't produced the performances that I did last season," Hollands told BBC Wiltshire.

Martin made his Norwich debut in the Championship in January 2007 and his most prolific season at Carrow Road came in 2009-10, when he scored 23 goals in 48 games.

But he has failed to replicate that form since and has found himself out of favour with only six months remaining on his current deal.

"It's been tough not being involved," he said. "It can be hard to get your head around not playing on a weekend.

"That's the main reason I've come here. I'm coming in to the last six months of my contract so it's even more important that I'm playing games."

Meanwhile, Swindon's move to sign forward Gary Madine on loan from Sheffield Wednesday has fallen through.

Madine was expected to arrive at the County Ground this week but Wednesday opted to keep hold of the 22-year-old after an injury to Chris O'Grady.