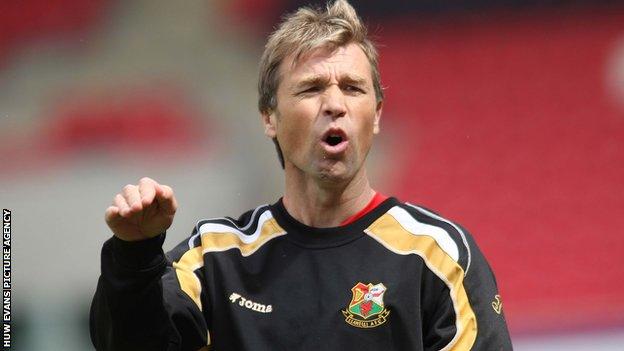 You've got to hand it to the FA of Wales (FAW), they are trying different ways of doing things with the Welsh Cup draw.

Time and time again, we only see the odd numbered ball coming out of the bag on TV during the early round draws and people go away and say 'that draw is fixed' as the stronger teams in the competition are kept apart.

This week however, Andrew Howard, FAW's head of competitions decided to take video footage of the draw and post it online, so that everyone could see the way the draw was made.

The draw itself didn't throw up too many obstacles for the Welsh Premier League's (WPL) top clubs with holders The New Saints having home advantage to former WPL side Conwy Borough of the Cymru Alliance, whereas Bangor City will host McWhirter Division One side Aberdare Town.

It would be a travesty to the WPL if Llanelli follow Neath out of the league on financial grounds. Legg's departure together with his assistant Steve Jenkins has not come as a shock to anyone in Welsh football as the club's troubles have been well documented.

The shocks of the round could come at Holyhead and Aberystwyth. The Harbourmen, currently sixth in the Cymru Alliance and having a good home record this season, have a home tie against Carmarthen Town and have exciting young players in their squad who are more than capable of causing an upset on their day.

Aberystwyth have one of the most difficult ties of the round with previous winners and runaway Cymru Alliance leaders Rhyl the visitors.

Rhyl's Greg Strong has assembled a squad who are destined to return to the WPL next season and will be all out to prove that they will be a force to be reckoned with and will seriously give Tomi Morgan's team a run for their money.

The draw has given us three all-WPL ties.

Airbus will come up against a spirited Port Talbot Town side. It won't be easy up north for the Steelmen, Airbus have surprised a few people the way they've started the season and Port Talbot will have to be at their best if they are to get something from this tie. Coincidently, both teams will meet in the WPL for a dress-rehearsal next week at the Airfield.

Current WPL leaders Prestatyn Town will fancy their chances of progressing through with an away tie at WPL basement team Afan Lido, whilst Connah's Quay will face financially stricken Llanelli whom they beat 6-1 on Sunday, which resulted in Andy Legg's departure from the club after the game.

The club are facing a second winding up order in the High Court on Monday after a petition by HM Revenue and Customs over unpaid tax.

It would be a travesty to the WPL if Llanelli follow Neath out of the league on financial grounds. Legg's departure together with his assistant Steve Jenkins has not come as a shock to anyone in Welsh football as the club's troubles have been well documented.

All credit to the players though as they have stuck by the club through this tough time and have carried on doing their upmost for the club under difficult circumstances.

Club chairman, Nitin Parekh has moved quickly to fill the vacant managerial position at the club by announcing that Bob Jeffrey, head of their academy, will take the reins for the foreseeable future with club stalwart and new WPL Hall of Famer Gary Lloyd assisting him.

Which leads me on nicely to the new WPL Hall of Fame, I was certainly shocked and honoured to be the first inductee into the league's Hall of Fame, I was completely oblivious on the day I received the award which was during The New Saints' match with Bangor City last month.

On the day I was under the impression that I was there as part of my media role with Radio Cymru until Sgorio presenter Morgan Jones completely took me by surprise with his announcement before kick-off.

It is an honour to cherish, knowing that your achievements over the years have been worthwhile and the sense that I have contributed to the development of the WPL.

Since then, three more players have been inducted into the Hall of Fame and I would like to congratulate them all.

The three who have joined me are: Colin Reynolds; who has made the most appearance (528) in the WPL; and Andrew Thomas; who made over 400 appearance for Caersws.

They were inducted on the same day, quite fitting really as they played together for many seasons at Caersws. The third, Gary Lloyd, is the most decorated player in the league's history collecting eighteen medals over the years.

By the end of the season, there will be a total of 20 inducted into the Hall of Fame to commemorate 20 years of the WPL.

It certainly wouldn't surprise me that the next two to be inducted will be managers - Bangor City's Neville Powell and Caersws manager Mickey Evans.