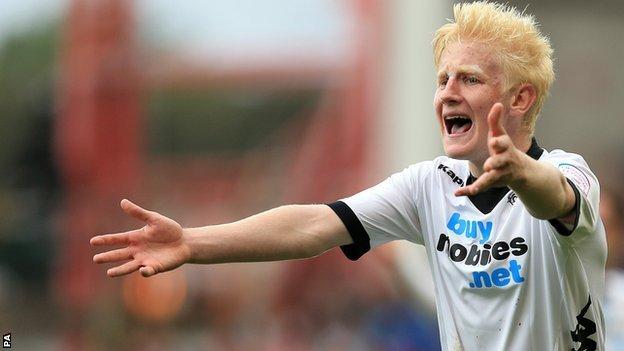 Teenage Derby County midfielder Will Hughes says being involved with the England Under-21 side was "surreal".

The 17-year-old made his debut as a substitute in Tuesday's 2-0 friendly win over Northern Ireland, becoming the second-youngest player to represent England at that age group.

"It was a bit surreal to start off with when you meet the lads at the hotel," he told BBC Radio Derby.

"But you get used to it, get to know them and get to see what they're like."

Hughes, who has been attracting interest from Premier League sides, added: "At any age group, pulling on the England shirt is going to be a massive achievement.

"But especially at such a young age representing the Under-21 age was a fantastic feeling.

"It's natural to be nervous before such a big game. It was a massive step up for me and I was feeling it before I came on, but when you get on and get your first pass correct, it goes from there."

Hughes only made his debut for the Rams against Peterborough United last season as a 16-year-old.

He is still only a second-year scholar but he has started 15 of the club's 16 Championship games this season.

The only downside is trying to combine being a first-team regular for the Rams with studying for A levels in politics and business studies.

"With playing so much this season, I have found it difficult," Hughes said. "But it is something I am keen on so I will have to keep on. I don't want to rely on football totally."