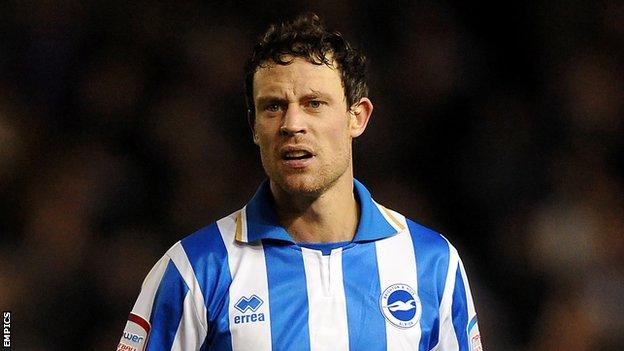 Brighton boss Gus Poyet says it is too early to consider extending Wayne Bridge's stay at the club.

The 32-year-old, who is on a season-long loan from Manchester City, has impressed at left-back for Albion.

Poyet told BBC Sussex: "From the club point of view, it's very easy. From Wayne's it's very difficult.

"We are trying to be realistic and wait. At the right time we will talk for sure because you can see he is different class."

The former England international has been an ever-present for the Seagulls in the Championship, scoring two goals in his 16 league appearances.

Bridge is currently in the last year of his contract at Manchester City, having joined from Chelsea in January 2009 for a fee of around £10 million.

Poyet says he does not want to put any pressure on the defender over whether he wants to remain at the Amex Stadium.

"When the right time comes, slowly, we will probably get close to [whether Wayne staying is] a possibility or not," the Uruguayan added.

"I think it's a bit too early, especially for him.

"If I was him, it's not a problem to ask the question or start talking.

"But I don't want to put Wayne in a difficult situation and him say 'Not now' and maybe people will think he won't be here next year."

Poyet admits that bringing Bridge to the Sussex club this summer was a coup.

"It was luck," he said. "In between his agent, Wayne and with respect to all of us, including me, [were] Manchester City.

"They were the key. We were all happy to do it but it depended on them. [City coach] David Platt did a lot for us."