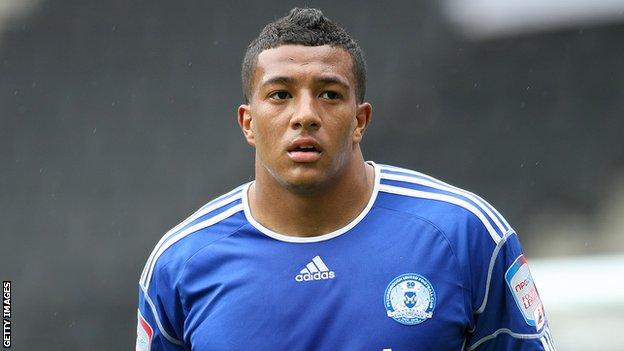 Mendez-Laing, 20 was one of four players transfer-listed by Peterborough for breaching club discipline.

"He's very quick and direct, can play either wing and is somebody who will excite the crowd when he gets on the ball," Pompey caretaker boss Guy Whittingham told BBC Radio Solent.

Benson has played 13 times this term.

"He's an older, more experienced player but has scored goals at this level," added Whittingham.

"Since we've lost Wes Thomas we've not had a partner for Izale McLeod and he will be a great addition for us."

Mendez-Laing was transfer listed and fined along with Gabby Zakuani, Tyrone Barnett and Emile Sinclair for a breach of club discipline on a night out on Saturday.

Two of the four were cautioned by police in the early hours of Sunday morning.

Zakuani's punishments have since been rescinded and Sinclair will no longer be fined, but stays on the list for "footballing" reasons.

But Ferguson has made it clear that Mendez-Laing and Barnett do not have a future at London Road.