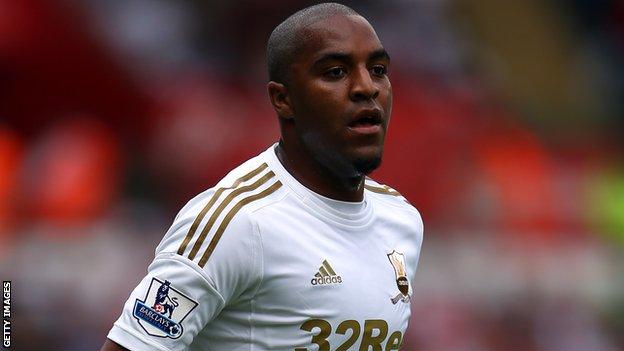 Agustien has revealed he was involved in a serious car crash in his home country in September.

Kemy has been quite unlucky. More than once when he has been close to the starting XI something has happened to him

The 26-year-old returned to action as a substitute against Southampton last Saturday after being out for two months.

"When something like that happens to you then you realise how small other things are," Laudrup said.

"When we come close to things like that we realise it. It was an incredible experience for him."

"When things like that happen to you they will always remain there. But life goes on."

The former Birmingham City player admitted he was "lucky to be alive" after his car was written off following the accident in the Netherlands.

Agustien made a late substitute appearance in the 1-1 draw at Southampton last weekend but is doubtful for Saturday's Premier League game at Newcastle United.

He managed only 45 minutes in a development game against Cardiff on Tuesday before injuring his toe.

Injuries have hampered Agustien's time with Swansea, whom he joined on a two-year contract in 2010 following his release by AZ Alkmaar.

"He's had his problems with injuries," added Laudrup.

"Kemy has been quite unlucky. More than once when he has been close to the starting XI something has happened to him."