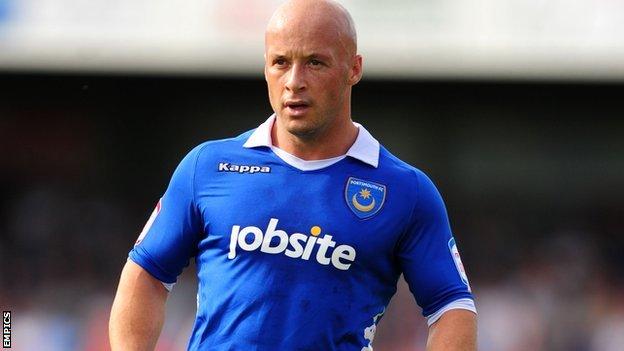 Luke Rodgers says he is focused on helping Shrewsbury move up the League One table after returning to the club.

The 30-year-old striker rejoined his first club on loan from Portsmouth last week, with them next to bottom after only three wins in 17 games.

"Don't get me wrong, it's good to be back, but the fans want to see the team winning," he told BBC Radio Shropshire.

"It doesn't matter who's coming back - I'm going to work really hard [to help improve the team's form]."

Rodgers scored 73 times in 204 appearances for the Shrews after graduating through their youth system, before leaving for Crewe in 2005.

He left the Alex two years later for local rivals Port Vale and has has since had spells at Yeovil, Notts County, Lillestrom and New York Red Bulls before joining financially-troubled Pompey this summer.

However, Rodgers was allowed to leave Fratton Park after just three months and this weekend will face one of those former sides, Crewe, on Saturday.

He is confident that Shresbury can be competitive at the Alexandra Stadium.

"I enjoyed it at Crewe, I got on really well with Dario [Gradi - former Alex boss] and I have really good memories

"Obviously the Crewe fans don't take to me in the same way because I've moved on to different clubs, but that's just fans."

"Crewe sides keep the ball, no matter what they'll pass it out the back and create chances - but I feel as if we keep our shape we can get a win on Saturday," he said.