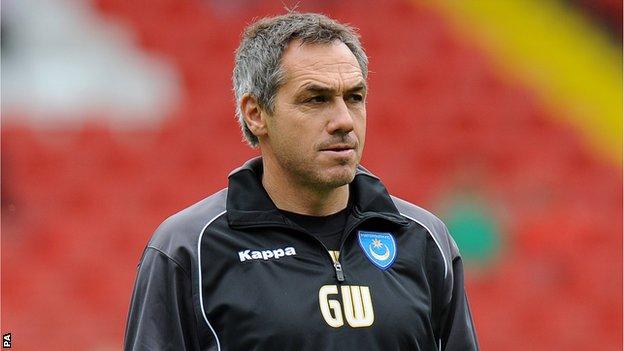 Portsmouth's caretaker manager Guy Whittingham says he wants the takeover of the club by the Pompey Supporters' Trust (PST) to be done before the start of the January transfer window.

Administrators announced on Thursday they had agreed the conditional sale of Pompey to the supporters group.

And Whittingham believes it is vital the deal is done before January.

"We want to make sure it is done for then to give us the best chance of getting players in and out," he said.

Pompey have been in administration since February and are said to be £61m in debt.

The PST has been vying for control of the club with former owner Balram Chainrai - but it is the Trust which has emerged as the most likely to assume control.

Former owner Chainrai is owed £17m by the club and holds a fixed charge on Fratton Park as security.

Administrators PKF will now seek to have Chainrai's charge lifted by the High Court, however, one of the Trust's major investors Iain McInnes has sounded a word of warning about Pompey's future.

McInnes, who would become Pompey chairman, has warned that if they do not win the court case with Chainrai, expected for later this year, then there is still a very real threat that the club could be liquidated.

But, if the club's administrators do manage to force the sale of Fratton Park through the court, Whittingham has urged for a speedy resolution to allow him act in the next transfer window.

He told BBC Radio Solent: "I'm delighted because we've wanted to be coming out of this situation for a long time now and it is great news that it's the PST.

"We've got January transfer window around the corner and we've got to plan for it."

All of Pompey's senior players are on one-month contracts and Whittingham admits he expects some to leave for more secure deals.

But Whittingham says with new owners in place he would feel confident of being able to bring new faces in.

"We've got to plan because not everybody is going to stay here," he said.

"Whether we want them or whether they want to go, that is the situation and we need to know where we are."

And he hopes, with new financial backing from the Trust, to bring in several more new faces over January.