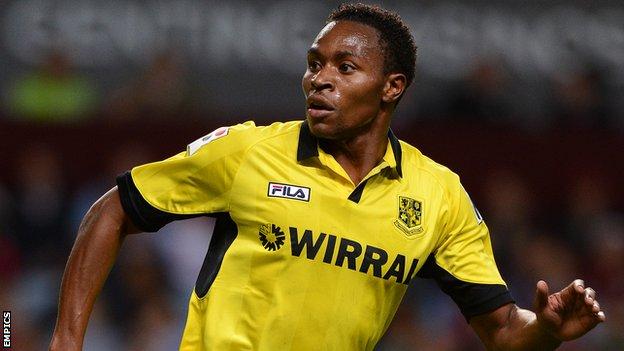 Tranmere striker Jean-Louis Akpa Akpro says he is making good progress as he bids to return to action in January.

The Frenchman broke a metatarsal bone in his foot in the in October.

And the 27-year-old is coping well as he recovers from the first major injury of his career.

He told BBC Radio Merseyside: "With experience, it's easier. I can cope with it more easily than if I had been 22. I think I would have gone crazy."

There's Cole Stockton, Jake Cassidy, Andy Robinson - everybody scores in this team, so it's not just about me. It's about everybody.

The who has scored seven goal this season, continued: "When you injure a muscle or something like that, it's maybe because you've done something wrong.

"It was unlucky and there's massive frustration because I started [the season] well, but I hope I will come back stronger."

The start of Akpa Akpro's enforced absence coincided with Tranmere's worst run of the season, winning only one of their next four matches in League One.

However, Ronnie Moore's side remain at the top of the table despite a

Akpa Akpro added: "The team are doing well and everyone is scoring goals.

"There's Cole Stockton, Jake Cassidy, Andy Robinson - everybody scores in this team, so it's not just about me. It's about everybody.

"Football is all about competition and when I came to Tranmere, I knew there would be competition."