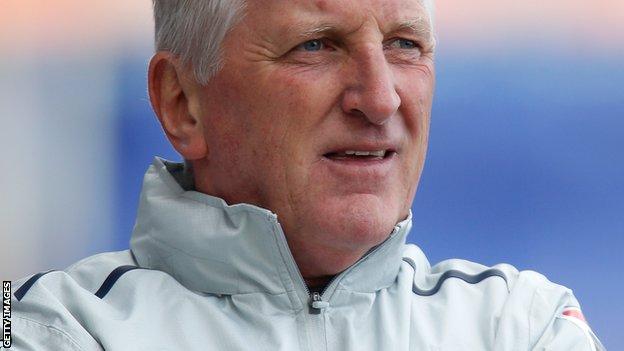 Ronnie Moore says Tranmere will face their most difficult game of the season so far when they take on MK Dons.

"We'll be against the best footballing side at this level and probably the level above," he told BBC Radio Merseyside ahead of

"It's probably the biggest game of the season. It's another televised game and another chance to show people why we're top of the league."

These are no mugs. If we're a point behind them at the end of the season, we won't be too far off going up.

A win for Rovers will put them 11 points ahead of Karl Robinson's side.

They have the added incentive of going eight points clear at the top of League One, with second meeting third on Saturday when Sheffield United host Stevenage.

But Moore has a number of injury problems for the fixture against seventh-placed Dons and the Tranmere boss has admitted that he may struggle to name a full selection of substitutes.

"Jake Cassidy and Liam Palmer will come back but there are one or two that probably won't play," he continued.

"All of a sudden, we are down to the bare bones. But I don't want to get the violin out and have people crying for us. We've got to get on with it.

"This will be the tester because we're playing a top side. These are no mugs. If we're a point behind them at the end of the season, we won't be too far off going up.

"We'll get a side out that will be competitive and I'd like to think any 11 that we put out will make it as hard as we can for them."