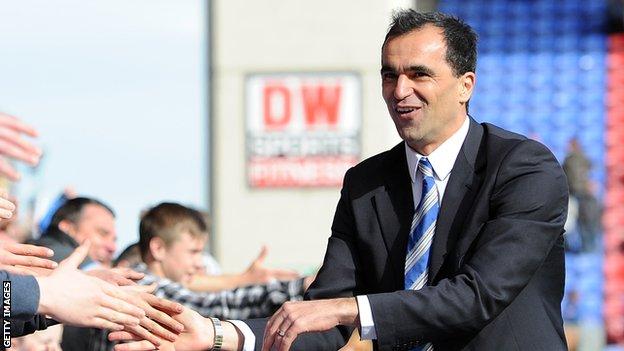 Roberto Martinez says he is committed to taking Wigan to the next level as he prepares his side to face Liverpool, the club he had talks with last summer.

Martinez met Liverpool owner John W Henry after Kenny Dalglish was sacked in May, with the Reds eventually appointing Brendan Rodgers as manager.

2009-10: Finished 16th in the Premier League. Highlights: Home wins over Chelsea, Arsenal and Liverpool. Low points: 1-9 defeat at Tottenham and 0-8 at Chelsea.

2010-11: Finished 16th. Highlights: An away win at Tottenham; defeating West Ham and Stoke in the last two games to escape relegation. Low point: 0-6 at Chelsea.

2011-12: Finished: 15th. Highlights: Home win over Manchester United along with away victories at Arsenal and Liverpool. Low point: Losing eight league games in a row.

The Latics, 14th in the Premier League, will leapfrog Liverpool if they win at Anfield on Saturday and Martinez believes better times are ahead.

He said: "This is an exciting time."

Martinez, 39, attracted Liverpool's attention for keeping Wigan in the top-flight against the odds last season.

But he insists he is happy to continue his working relationship with Latics owner Dave Whelan.

"You need to make decisions in life at the time," the Spaniard told BBC Sport when asked about his talks with Liverpool.

"Our chairman is a very persuasive man.

"We've finished the first chapter and now we're into the next one."

Rodgers has struggled for consistency since taking over at Anfield, with Liverpool starting the weekend 13th in the table.

But Martinez believes they will come good under Rodgers.

"Their position in the league is just a snap shot of this moment," he added. "I do think Liverpool will be challenging for a Champions League spot."