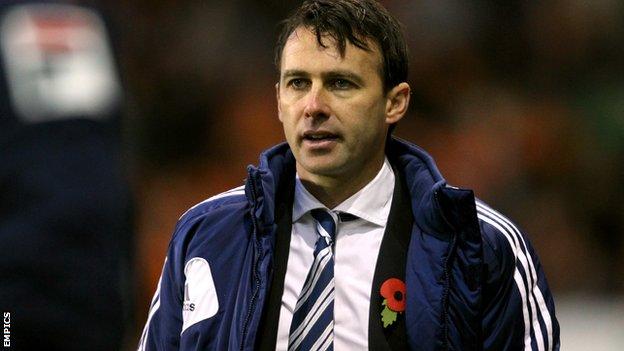 New Bolton boss Dougie Freedman has backed the claims of his captain Kevin Davies by saying Wanderers can make an immediate return to the Premier League.

"Let's never be embarrassed about saying that. We've got the squad that can challenge," said the Scot.

"The problem we might face is that we've given ourselves an uphill battle in terms of where we're starting from."

Bolton are 17th in the Championship, but have gone unbeaten in their three matches

Striker Davies said earlier this week that Wanderers, who were relegated from the top flight in May,

Speaking to BBC Radio Manchester, the former Crystal Palace manager continued: "I think Kevin's right in saying that if we can get a run together, we have got the strength of squad that can push up the league.

"We won't really know that until the turn of the year and if we're within striking distance to do that, but he's right when he says we're capable of putting a run together."

Bolton host struggling Barnsley on Saturday and Jacob Butterfield will be hopeful of making his Wanderers debut against the club he left in the summer.

The 22-year-old was an unused substitute at Blackpool last weekend, after prior to the

"I've come here to play games. I want to be in the team, getting some football in, putting some performances and showing people what I can do," said Butterfield.

"I'm going to enjoy it and get Bolton back up towards the top end of the league where they should be.

"If you go on a run, you can really move up the league. That's the kind of league that it is and it's always been that way."