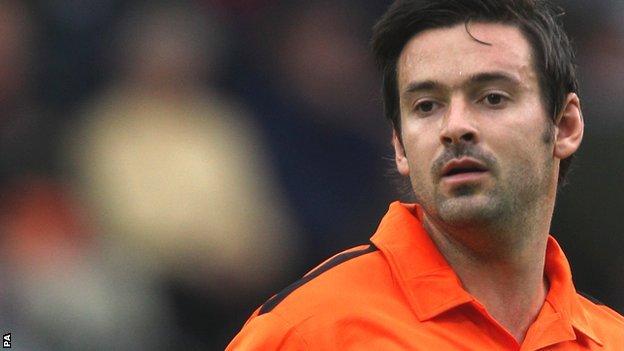 Lincoln City have signed striker Adam Boyd on a short-term deal after a successful trial.

The 30-year-old ex-Luton and Hartlepool forward has signed until 2 January.

Imps boss David Holdsworth told BBC Lincolnshire: "He is a well-known figure and has put football first. He has offered to play for next to nothing and that says a lot about the player."

I am not trying to change anything and bring high-level earners in here. To change things would be silly

Boyd, who left Hartlepool at the end of last season, has been with the Imps after a short spell with wealthy Northern League side Celtic Nation.

Lincoln's FA Cup run - which has seen them progress into the second round - has freed up money to tie up a deal.

"He's coming to put himself in the shop window so it's a win-win situation," Holdsworth added.

"If we can get him match fit and match sharp then it will be very beneficial and maybe something we can go on with.

"His reputation and knowledge can be a big plus for us and for the younger players as well."

But Holdsworth said would be foolish to change things given their impressive nine-match unbeaten run.

"I haven't had a discussion about finances with the chairman [Bob Dorian]," Holdsworth said.

"I am not trying to change anything and bring high-level earners in here. To change things would be silly. We have a very good togetherness here and I don't think that needs to change now."