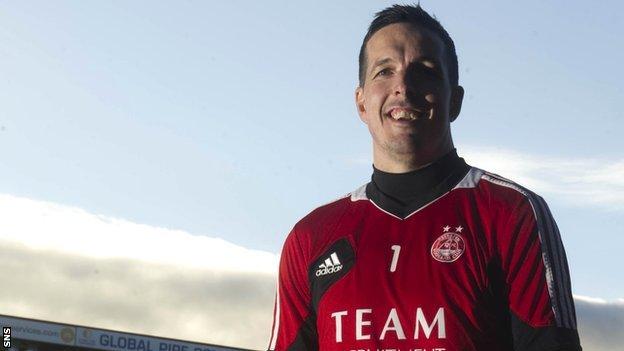 The 32-year-old suffered a brain seizure in May 2011 which led to complex surgery to remove a blood clot on his brain.

And Langfield received the all-clear on Sunday after undergoing a second scheduled operation.

"It's a massive relief off my shoulders. I'm just happy it's finally gone," he said.

"I'm really happy, and I don't think I've ever enjoyed my football as much.

"It does give you a different perspective on life. I don't look to the future too much now, I just take each game as it comes."

Langfield praised the support he had had from fans as having got him through "some dark times".

"The fans have been amazing and I'm just glad I've came out the other side."

And Langfield thinks the Dons fans will reap the benefit of his increased confidence.

"I'm really happy, and I don't think I've ever enjoyed my football as much.

"I always had it in the back of my mind that there might be something wrong with my head.

Looking forward to this weekend's match with Celtic, Langfield said that confidence was high in the Aberdeen camp.

"The game against St Mirren we played really well, scored four good goals and we go into this game on a high.

"It's a massive game - we're obviously in a good position just now, It's a top of the table clash and it's great to be involved in games like that.

Langfield also thinks that, while Aberdeen may not be returning to the glory days of the early 1980s, the club is heading in the right direction.

"It's a good step in the right direction. We are where we want to be, up at the top challenging for the likes of European places.

"We don't want to be near the bottom, where we have been the last couple of seasons, looking up (at teams).

"We're looking down now, which is a massive difference."