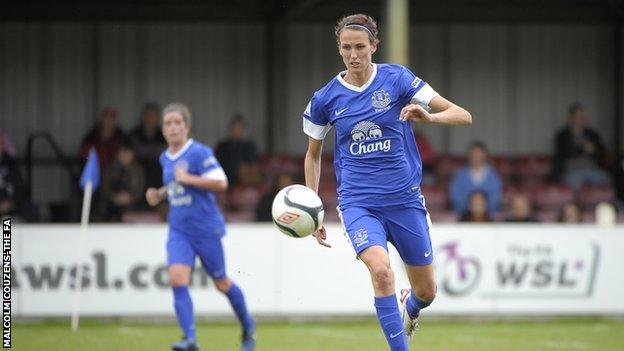 Last week I was fortunate enough to be on holiday in Miami where I was mostly lapping up the sun on the beach, watching the Miami Heat basketball team and getting to grips with some baby alligators.

Now, after being home a few days, it feels like thoughts of next season are becoming louder in my mind such have been the events at Everton over the last few weeks and days.

While I was busy switching on the Christmas lights in Sunderland on Wednesday - Emmerdale's Tom Lister stole the show - Everton named a new manager and lost three players, including my England team-mate Fara Williams.

It all came as a bit of a shock but although my future is still to be decided, I wouldn't say it will directly affect my choices for next season.

"I was shocked and it's no secret that it's a big loss to Everton. Fara was one of the reasons why I signed for Everton six years ago, she is a top international player and I feel like I have learnt loads from playing alongside her. I wish her all the best for the future but I've told her already we can't be friends now she has joined Liverpool!"

Like many other players in the Women's Super League, my two-year contract at Everton has come to an end and the loss of Fara and Natasha Dowie to Liverpool has left Everton weaker. But with three months until the start of the season there is plenty of time for the new boss Andy Spence to bring in new faces and it will also probably kick off a busy period where there will be plenty of movement between clubs.

From a personal stance, I've had a new contract offer from Everton this week, but I am being totally honest in saying that I've not made a decision yet as I've not had time to weigh things up. I don't want to be the boy (or girl) that cried wolf and say something which I then change my mind about.

I'm back working now at Gateshead Academy which is good because I tend to over-think things anyway, so it will take my mind off it a bit. But I will speak to the right people and hopefully make the right decision.

Everton is certainly a club in transition right now with former boss Mo Marley leaving a few weeks ago and assistant manager Andy Spence taking over this week.

Mo has been at the club for 25 years so everyone was gutted when she announced she was leaving. It might sound over-dramatic but when she told us it was like someone had died. It was just really sad.

She has given so much to the game with Everton and with the England Under-19s so I don't blame her for wanting to spend more time with her family.

I know there has been some speculation as to whether Mo could become the next England manager, and she has the capability if she were ever offered the role sometime in the future.

In the meantime the current boss Hope Powell, and everyone involved, with England will be focussing on the European Championship in Sweden next summer, particularly now that the draw has been made.

We received our winter training programme this week and now we know that we will face France, Spain and Russia in the Euro 2013 group stage, the tournament doesn't seem too far away.

When I found out who we would play, my first thought was it was a difficult start. We have never beaten France and have had tough games with both Spain and Russia in the recent past.

But having reached the final in Euro 2009, our motto for the qualifying campaign has been to turn silver into gold. There is no point in going to a tournament if you don't think you have the potential to win it and although our first target will be to get out of the group, we will approach our first game as one of six.

Thoughts of the European Championship come into play when choosing the right club for next season and it was interesting speaking to my England team-mate Anita Asante about this recently.

We were filling in a form logging the number of training sessions we do each week and while I put down two for my club, she recorded six or seven at her club, Gothenburg, in Sweden.

I want to be in the best shape possible but I feel like the past couple of years have gone reasonably well for me at international level whilst at Everton.

One way or the other, you will probably know whether that will continue by the end of November.