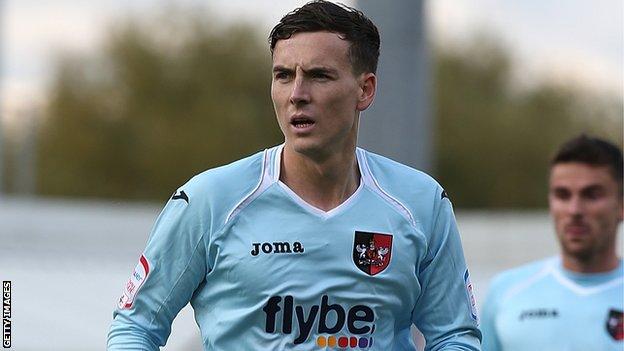 Exeter City midfielder Alan Gow says the squad are growing in confidence after their recent poor run of results.

City lost seven out of nine before a and a

"There's been a lack of confidence, that's what happens when you lose," Gow told BBC South West Sport.

"We were unlucky to not win last week, so hopefully we can carry on with it this week because then we've got a big game on Tuesday."

The Grecians travel to fourth-placed Bradford on Saturday before an away trip to leaders Gillingham, who have only lost once at home all year.

"The team's scoring goals, Jamie Cureton's always got goals in him, so we're confident we can score goals," Gow said.

"In the last few games we have been better defensively so we need to take that into the next game."

Gow missed a large chunk of the last month with a thigh injury and his absence from the starting line-up coincided with the team's loss of form.

"It's been frustrating for the past few weeks but I'm glad to be back playing now.

"It was tough to watch but maybe there's a bit more stability in the team.

"Before we had the same team for weeks and we had good results.

"But the team was chopping and changing with different formations so maybe it's helped having a settled side once again," he said.