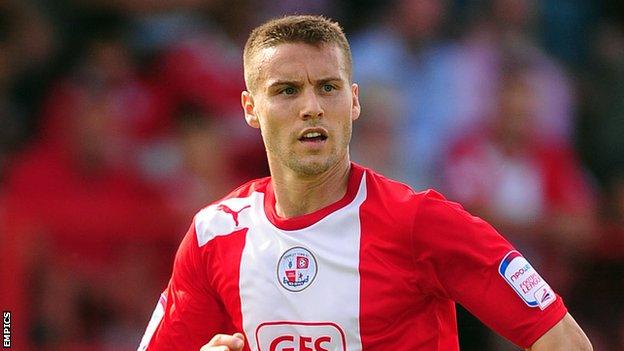 Crawley Town defender Mat Sadler says a "winning mentality" is behind their flying start to life in League One.

The Reds, who have won back-to-back promotions, are currently in the League One play-off places.

He told BBC Sussex: "The club seems to have a winning mentality. If you've got that it sees you through a lot of games no matter what league you are in.

"There's something in the water around here. Fourth in the league doesn't faze us. We want to keep ticking on."

Sadler has made 17 appearances in all competitions since joining Crawley from fellow League One side Walsall this summer.

Just two years ago, the Reds were still in non-league and the left-back says the infrastructure at the club is still improving.

"Everything is changing, from the training ground to the stadium and the youth system," the 27-year-old added.

"It's all catching up with the success the club has had on the pitch. We hope to be pushing for the Championship this season."

Richie Barker has been fantastic. Let's hope that's the breeding ground for another success story this season

Sadler says their home form will be crucial if the side are to be challenging for an unprecedented third straight promotion come May.

"There is no pressure at all," he said.

"We want to pick up points and see where it takes us.

"If we want to be successful this season, we need to be picking points up at the Broadfield. We've done that so far this season and need to continue it."

Meanwhile Sadler says manager Richie Barker has been an integral part of their success.

The former Bury boss was appointed just one week before the start of the season after Sean O'Driscoll left the West Sussex club after just two months in charge.

"Having been a player himself, he really does respect what the players feel on a day-to-day basis. We've done really well under him so far.

"He seems to knows what a player needs. Let's hope that's the breeding ground for another success story this season."