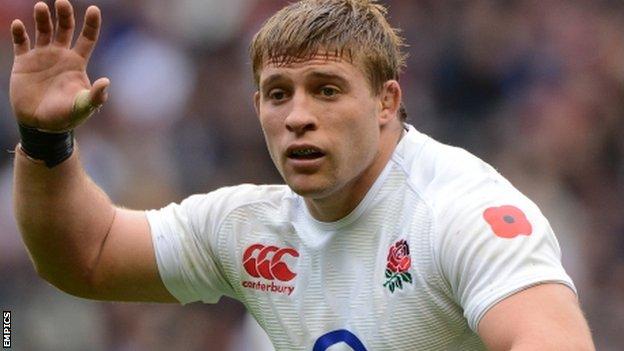 It's one of those curios of sporting logic that a team is never more dangerous to play against than when they've just been soundly thrashed.

Never mind that the rational approach would be to view a team as considerably more threatening had they been the thumpee rather than the thumped - on form and full of confidence; packed with proven class rather than struggling badly in every department.

So it was at the England rugby squad's training base in wintry Surrey as they prepared to face Australia this weekend. All around, players and management were meant only one thing: they would be a fearsome proposition come Saturday afternoon.

If such caution can sound convoluted - is a wounded animal genuinely more menacing than one at full strength? - then there are more straightforward rugby philosophies available in the camp.

"I come from a big family, with 20-odd cousins," says England hooker Tom Youngs, "and they all played rugby. When I was younger, it didn't matter if you were six years old or 16 - you'd still have to tackle the 15-year-olds.

"You'd be in the garden, running around, smashing into each other. Tears weren't allowed - 'Go and cry to your mummy!' You'd soon toughen up."

Youngs, about to win his second international cap after just nine first-team starts for his club side Leicester, is both a throw-back to less complicated times and something very unusual in the modern game.

Less than three years ago he was a biffer of a centre, a decent enough lower league bulldozer but so far off joining younger brother Ben in England colours that it would have taken an injury crisis on a par with the Black Death to see him called up.

Who is Tom Youngs?

Two years ago, when England last played Australia and Ben pulled the strings at scrum-half, Tom was in the stands as a spectator, enjoying a boozy day out with father Nick, another former England nine.

That by the Wallabies' next visit he has transformed himself into the country's current number one number two (a switch first suggested by former England stalwart Peter Winterbottom, and then again by current Springbok head coach Heyneke Meyer while in charge at Welford Road) is testament to an uncommon determination.

"The hardest thing was getting the engine to run round," he tells me, rebuilt neck thrusting out of his polo shirt like a pale tree trunk.

"As a back you do something and then stop. As a forward you scrum, so you get a horrible lactate build-up, and then you have to try to run round the pitch.

"The lactate would just take over. I could hardly run. All I could manage was a quick walk. So I had to do some gruelling sessions - not to get rid of it, because you can't, but to make it go as quickly as possible."

Youngs was never an old-fashioned willow of a centre. A month in the gym put on further weight - but that soon became part of the problem.

"The bulking-up phase was quite a strange one. I was 95kg as a centre, and I went up to 100kg, and I just couldn't carry it.

"If you put an extra five kg on someone in a backpack and asked them to run about, they would really struggle. That's what happened to me. I couldn't last a game carrying that extra weight.

There have been unexpected side-effects. Youngs may have gained international caps, but they have cost him half his wardrobe.

"None of my old gear fits me. I'm now an 18 ½ inch collar, which means shirts cut for that are down to my knees. It sounds a bit posh, but I've had to get my shirts tailored."

In his playing pomp Will Carling reportedly insisted on wearing Armani trousers for similar reasons; his thighs were supposedly too large for any other brand.

Then again, there's a good chance the darling of south-west London never gave Fosters or Mr Byrite the opportunity. Youngs, brought up on a farm in Norfolk, prefers to keep things simple.

He said: "Getting to this point for me has been all about little steps, little goals. The big aim when I was at Nottingham as a hooker was to get to Leicester. The big aim when I arrived at Leicester as third choice was to get into the first team shirt. Then it was Saxons, or the elite player squad. It's quite strange. It's come round quickly."

He is still adjusting. "What hurts most? Neck, shoulders, back. On a Monday it's bad. It takes a long time to get over it.

"If the front row bend down to scrum on a Monday after playing Saturday, we can't hardly do it. We can't get down to the height we have to to scrummage.

"If one of the backs felt like we do, they probably wouldn't train. It's not nice. But you get used to it - or you get used to feeling sore, so you'd don't really think about it.

"I don't think it was 'til last season that I mentally completed the switch. I still had so much to work on. One of my goals - I remember writing it down - was, 'I want to be respected by my peers as a hooker.' Not as a hooker who used to be a centre. And I think I got that last season.

"The important thing for me was to get that forward mentality of hardness, enjoying the set-piece, but also keeping the side of me that was a back - reading gaps, reading space, communicating with 10s and 12s, trying to help them out. Every player has to have an X-factor, and that's mine."

Youngs is aware Equally, like his fellow fresh-faced autumn front rowers Joe Marler and Mako Vunipola, he knows that this is more than a stand-in show. Lancaster wants strength in depth as he builds towards the next World Cup; the new boys are providing it.

"Dylan's a great player. He's very experienced; he's played in some tough games, and played them very well. But his injury gives me an opportunity, and I don't want to let the country down," Youngs said.

"Whatever the coaches decide is best for the team works for me. If I sit on the bench, I give the best 20 minutes I can give. You won't always get the selection, but there's no point sulking about it."

Australia will provide a sterner test this week But they are shorn of key backs Will Genia, Quade Cooper and James O'Connor, as well as star openside David Pocock and second row and captain James Horwill.

Youngs will face a front row in Benn Robinson, Tatafu Polota Nau and Ben Alexander that, while experienced, will not intimidate. Equally, he will not go after them the way the six-year-old wannabe centre did his big cousins.

"I'll have a look at what my opposite number does round the park and what I can do to stop him, but you should never come at it on a one-on-one motive. If you suddenly see him coming and you fly out of the line to try to smash him, the ball's gone straight past him and they go through the gap I've left, you look like the idiot. You have to control yourself.

"As a sportsman, I've learned from previous experiences where I've let the occasion get to me, and I haven't performed how I wanted to at set-piece or around the pitch. I make the point in big games of reminding myself that it's just rugby.

"You do the anthem, take your tracksuit off and you stand there in the position to receive the kick-off. I'll be standing where I stood when I was playing for Nottingham. Suddenly it's just like any other game."