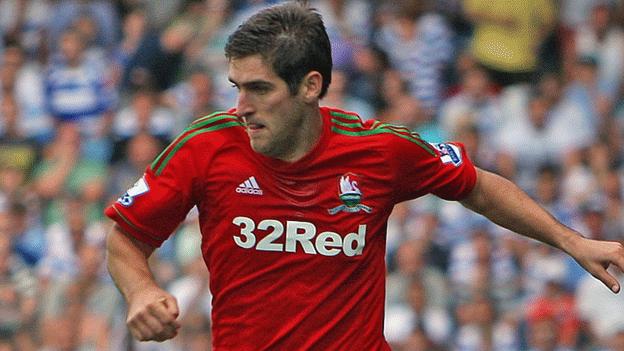 Graham is back in the squad for their game at Newcastle after missing last Saturday's draw at Southampton with a back problem.

Before that injury, last season's top scorer had been left out for three matches.

"I feel as though my performance hasn't been so good, and rightly so I should be dropped," said Graham.

The former Watford player says the experience is just part of being a professional player.

"Just because I was dropped for two or three games doesn't mean I'm going to spit the dummy out and go knocking on the door and say I should be playing or I want to leave.

"You know as a professional footballer you're going to get dropped one or two times in your career.

"It's how you deal with it that counts. I feel I've dealt with it well.

Last season, with Brendan Rodgers in charge, Graham made 39 appearances for the Swans in all competitions, and scored 14 goals.

He's found goals harder to come by under Laudrup this season, finding the net three times in 12 games.

"I was in the team 99 per cent of last year, but the gaffer's come in and over the past few games I feel as though myself my performance hasn't been so good.

"It's just a case of getting my head down in training and showing the gaffer that I'm ready to play and ready for selection whenever called upon.

The Swans are lying 11th in the Premier League, once place below Saturday's opponents Newcastle.

They wuill be without South Korean international Ki Sung Yeung who has hamstring injury.

Winger Pablo Hernandez is also a doubt with an ankle ligament problem.