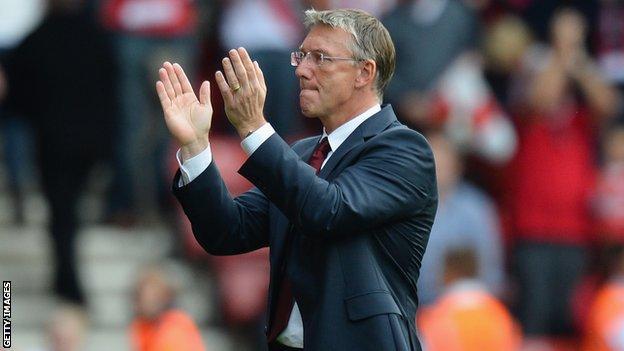 Southampton boss Nigel Adkins believes neither he nor QPR boss Mark Hughes will lose their jobs after Saturday's game at Loftus Road.

The Saints, yet to win away from home, are currently second from bottom in the Premier League, with opponents Queens Park Rangers below them.

When asked if both managers are under pressure heading into the match, Adkins said: "I don't think so.

"I'm pretty sure come Monday that both managers will still be in situ."

He added: "I think there are two good managers and two good football clubs.

"The media will build it up that way because they have just highlighted two teams at the wrong end of the division."

Southampton, returned to the top flight this season after a seven-year absence and have won only one game when they beat Aston Villa 4-1 in September.

After lengthy discussions earlier this month Adkins was backed to continue as manager but he has been told by chairman Nicola Cortese that nothing less than Premier League survival will be enough.

Rangers boss Hughes, who signed eight players over the summer, is without a victory this season and has picked up four points from 11 matches.

Despite a poor run of results, chairman Tony Fernandes pledged his support for the former player in October.

Adkins, who has taken the Saints to two consecutive promotions, thinks his side will find their form in the league.

He said: "It's the next game in the journey that we're on. Every game that you look at has three points up for grabs.

"That's what we've got to go and do. We've already established that we're at the wrong end of the league table.

"It's a tough league that we're in, we're well aware of that, but one we love being in and one we expect to be in for many, many years to come."

Heading into Saturday's game, Adkins is odds-on favourite to be the first Premier League manager to lose his job this season.