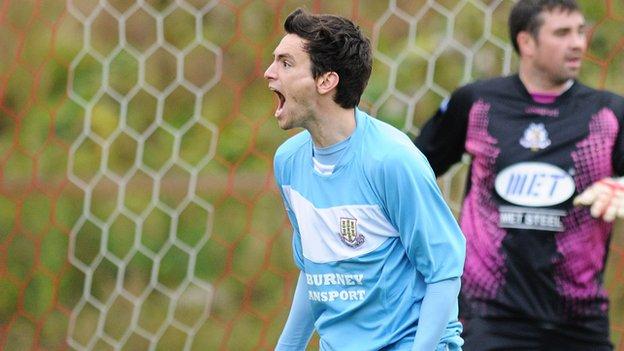 Ballymena United will be without suspended pair Mark Surgenor and Gavin Taggart for the Premiership clash with leaders Cliftonville.

Midfielder Ciaran Caldwell (foot) is the only Reds player missing for the Showgrounds encounter.

Cliftonville sit six points clear at the top with the Sky Blues eight points back in fifth.

Linfield striker Mark McAllister is banned as the champions prepare to take on Glenavon at Windsor Park.

Jamie Mulgrew is set to return from a back injury while Matthew Tipton and Ross Clarke are added to the squad.

The Blues are aiming to bounce back from last weekend's 3-0 defeat by Cliftonville at Solitude.

"Prior to the Cliftonville game we turned in an exhilerating display at Ballymena to record a 6-0 victory," Linfield boss David Jeffrey told the club website.

"Before that we produced 3 other victories, all with clean sheets and that's the sort of form and results we want to get back to.

"Earlier this season we took part in a titanic battle down at Mourneview. They were excellent in the first half and we bounced back in the second half.

"Coming here will hold no fear for a Glenavon side that has enjoyed two excellent home victories against Glentoran and Donegal Celtic in recent weeks.

"We have to make sure we are up for what is sure to be another battle."

Adam McMinn and Johnny Montgomery are banned for Dungannon Swifts ahead of the Stangmore Park meeting with third-placed Coleraine.

Suspension rules out Portadown pair Chris Casement and Chris Ramsey for the game against Crusaders at Seaview.

Glentoran travel to New Grosvenor to face a Lisburn Distillery side missing the banned Johnny Harkness.