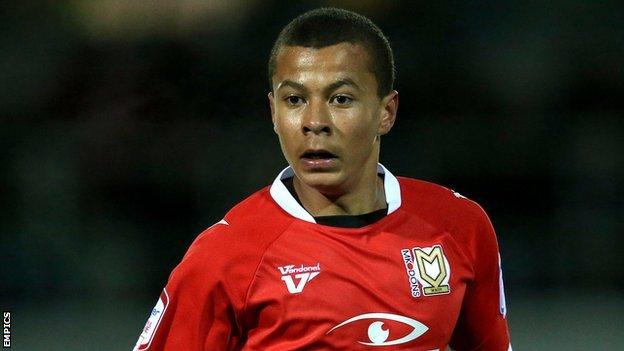 MK Dons boss Karl Robinson has said it will be tough to hold on to the "pure talent" of young midfielder Dele Alli.

"I hope we can [hold on to him]. It will be hard obviously," Robinson told BBC Three Counties Radio.

"I didn't see any 16-year-olds playing for any of the big teams at the weekend. He's a talent, a pure talent."

He added: "Let's just hope we can nurture that and guide that through the system."

England Under-17 international Alli made his first Dons appearance as a substitute in the original 0-0 draw with Cambridge City two weeks ago.

But it was in the second-round replay where he flourished, fitting into MK's passing style and providing a superb strike from distance.

After the game Robinson said: "We've just witnessed the birth of a star. He's a tremendous talent, but he's not yet ready to start league games.

"There are 12 months of big development to come for him and we've got to make sure that we look after him. But the 4,000 fans who watched tonight witnessed a very talented footballer take centre stage."

MK are building a reputation for producing talented youngsters, with 22-year-old winger Adam Chicksen now a regular first-teamer, while striker