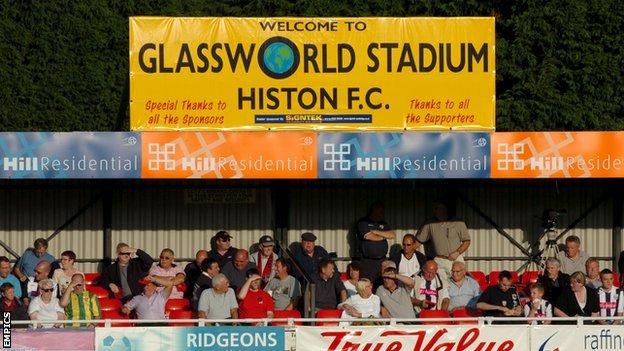 Histon have postponed Saturday's Blue Square Bet North fixture at Colwyn Bay amid a financial crisis at the club.

The Stutes, who have paid their players this month, will seek professional financial advice on Monday.

Former chief executive Allen Soraff won a court case to redeem an unspecified sum owed to him by the club on Tuesday.

The players have been paid up to date but obviously there's a cloud hanging over that now. The players and I will expect some answers on Monday

But Soraff, who left Histon in June 2010, told BBC Radio Cambridgeshire: "This news has got nothing to do with what happened this week with me."

He added: "I've made it clear I have no intention of putting them under any pressure or any insolvency procedures.

"There is no way I would have ever have put the club in a situation where they would have to consider going into administration."

In a statement the club said they had informed the Football Conference they would be "unable to fulfil" the game against Colwyn Bay.

A Conference statement added that the postponement was a result of "circumstances unforeseeable to the present board" at Histon.

It is understood chairman Russell Hands is on holiday until next week.

"The disappointing thing is we've got no answers," said manager Dennis Greene.

"The board are just saying to be patient and positive and wait until Monday once they've had a meeting with the financial advisers.

"The players have been paid up to date but obviously there's a cloud hanging over that now. The players and I will expect some answers on Monday."

Attendances have been dwindling at the Glassworld Stadium, with only 177 watching last week's FA Trophy tie against Boreham Wood.

Since the club's heights of an FA Cup second-round victory over Leeds United and reaching the Blue Square Premier play-offs in the 2008-09 season, the Stutes

Histon's full statement read: "The directors of Histon Football Club Ltd are seeking professional advice on the financial position of the club on Monday, 19 November and the club will issue a statement with further information after that meeting.

"In the meantime the Club has advised the Football Conference that it is unable to fulfil its fixture at Colwyn Bay on Saturday, 17 November."

The Conference statement added: "This matter will, if applicable, be subject to consideration under the Rules of the Competition."