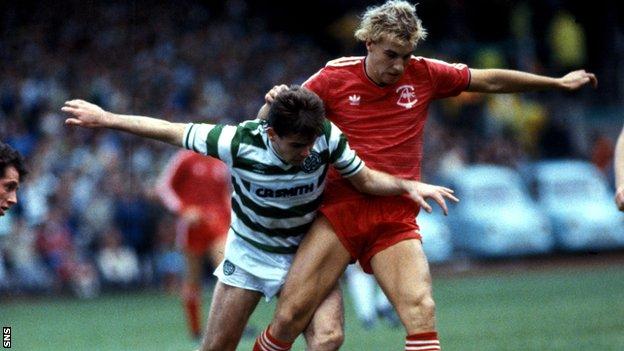 Neale Cooper says Celtic's trip to Aberdeen has the same importance as a Champions League tie.

The former Dons midfielder believes the encounter at Pittodrie on Saturday has captured the imagination.

"This is like a Barcelona game for Celtic because of the closeness of Aberdeen to them and how well Aberdeen are playing this season," Cooper told BBC Scotland.

"It's a massive game for both sides and everyone's buzzing in Aberdeen."

Cooper, who recently resigned from his managerial post with League One side Hartlepool United, admires the work of Craig Brown this season.

"They've got a lot of quality in the team - youth and experience," said Cooper.

"Boys like Johnny Hayes, who I'd have loved to take to Hartlepool but I couldn't manage because Aberdeen managed to get him in - boys like that throughout the team and the young lads that have come in have been exceptional.

"What a change Craig and the staff have made there in a matter of months."

One Don especially keen to put another dent in Celtic's title hopes is their former player Niall McGinn.

The Northern Irish attacking midfielder has scored in Aberdeen's last seven consecutive league games, and could match a record held by Frank McDougall from 1984, should he gets an eighth on Saturday.

"If he can equal that, what an achievement it is," Cooper said.

"The lad's done exceptionally well and just burst onto the scene really this season. Frank was one of the best strikers Aberdeen ever had."

And according to Cooper, fans of the team he turned out for more than 100 times have a pivotal role in keeping their team at the top.

"Aberdeen have got a wonderful away support and there's more coming in at home games because they're enjoying what they're watching," he said.

"All that breeds confidence amongst the team and when that happens you can achieve anything."