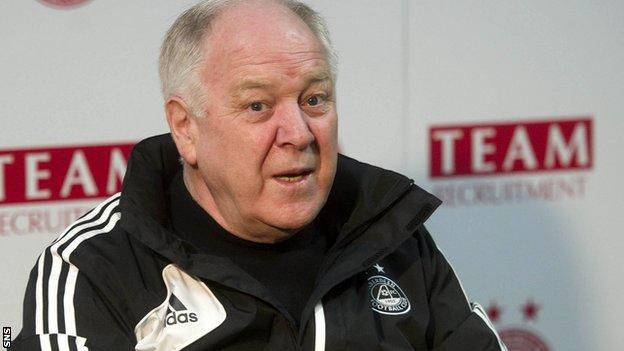 Craig Brown has called for optimism amongst Aberdeen's home support to help his team beat Celtic on Saturday.

And the manager believes the Pittodrie faithful only need to look at their own admirable travelling fans for inspiration.

"Our away support is quite unbelievable in terms of the volume they produce," said Brown.

"If the home support, in relation to the number, could produce that amount of volume, it'll be a goal of a start."

Pittodrie is set to house a bumper crowd for the visit of the Scottish Premier League champions and Brown is eager to put smiles on their faces.

"There's nothing more depressing for me than to see the Aberdeen support drift away unhappy from a home fixture," continued Brown.

"It's really rewarding when you find the fans are happy."

With the Dons one point behind second-placed Celtic, Brown encouraged those in the north-east of Scotland as a whole to lighten their mindset.

"The glass is always half empty here - 'Paul Lawrie didn't win The Open, you know, [Jean] van de Velde lost it' - that's the kind of mentality up in the north east of Scotland," he explained.

"I'm from the west and in the west it's far more positive. The Hamilton and the Motherwell teams always thought they were going to win, up here you always think you're going to lose.

"We have a home game, home support, a good run of form without being brilliant, and therefore we're going to try and win the game."

One piece of positivity definitely coming out of Pittodrie was that of Cammy Smith signing a new contract until 2015.

The 17-year-old striker made his first-team debut in April and has scored against Inverness Caledonian Thistle this season.

"Quite often the unbridled enthusiasm of the young players who have never known defeat against the Old Firm can be invaluable," said Brown.