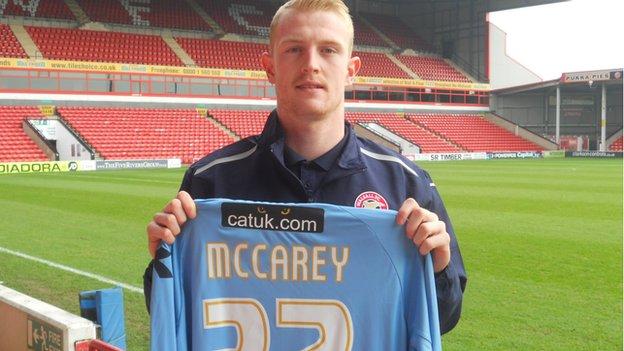 Struggling Walsall have responded to their continuing run of poor results by bringing in young Wolves keeper Aaron McCarey on an initial month's loan.

The Saddlers, who have now gone 12 games without a win, have shipped nine goals in their last three matches.

And McCarey is available to make his debut at Crawley on Saturday.

"Aaron is a talented young lad who will come here and compete for a place," said Walsall manager Dean Smith.

Walsall's goalkeeping duties have been shared this season between David Grof and Karl Darlow, who was recalled from loan by Nottingham Forest last month.

The Republic of Ireland Under-19 keeper has been at Molineux since signing in January 2010 from former League of Ireland side Monaghan United.

He spent a spell out on loan with non-league Telford United two seasons ago.

"We've watched him a few times and have noted his progression," added Smith. "I feel that he will come here and strengthen us in what is an important position."

McCarey's arrival is the second favour done to Walsall by one of their two Black Country neighbours in a week, following young West Bromwich Albion midfielder Sam Mantom's return on loan.

The Saddlers now stand 17th in League One ahead of the trip to Crawley, having not won since 22 September.