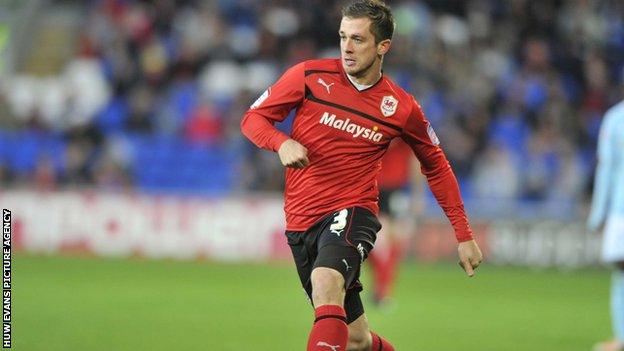 Defender Andrew Taylor has signed a new deal to keep him at Cardiff City until 2016.

The 26-year-old has emerged as a key player in Malky Mackay's Bluebirds side this season.

"Andrew is one of those players who sometimes goes under the radar when it comes to making headlines," said manager Malky Mackay.

The former Middlesbrough defender is a regular in the Cardiff side which is third in the Championship.

"Andrew is one of those players who sometimes goes under the radar when it comes to making headlines," said Mackay.

"But he is always one of the first names on the teamsheet for me and has been utterly consistent in his attitude, application and performance since he joined us almost eighteen months ago.

"He is one of the guys I know I can absolutely count on week in, week out, so I was really pleased that he is as happy with us as we are with him.

"Thanks to Andrew and his representatives for working with us to make it a relatively straight forward process."

Taylor signed for Cardiff from Middlesbrough on a free transfer in July 2011 and previously played under Mackay during a loan spell at Watford.

Former club Middlesbrough will be Cardiff's opponents on Saturday with Mackay's side looking to maintain their 100% home record.