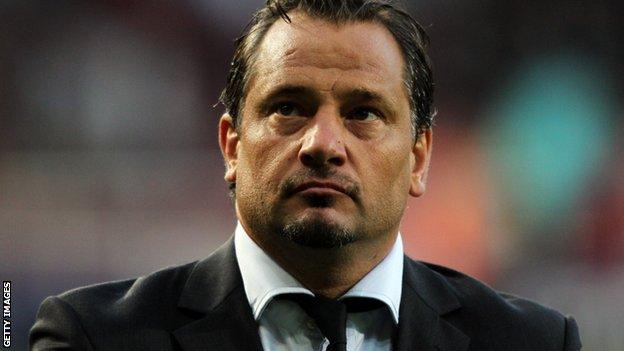 Aldershot Town manager Dean Holdsworth says his ambition for success is hampered by the club's finances.

Holdsworth reaches his 100th game in charge of the Shots this weekend with the club bottom of the Football League.

He told BBC Surrey: "I knew when I took this job that we weren't going to be sitting at the top of the division.

"It was always going to be a challenge to perform and get the best out of the players with the money I had. I'm not under any illusions."

He added: "We are in a cluster of clubs who all want to get out of the position they are in. I know we have the tools to do it."

The former Wimbledon and Bolton striker was appointed as Aldershot manager in January 2011 and guided the Shots to 14th place in League Two.

In his first full season in charge in 2011-12, Holdsworth led the EBB Stadium outfit to the fourth round of the League Cup for the first time in their history, set a club record of six consecutive home league victories and finished 11th, just six points off the play-off places.

This summer Holdsworth spoke of his desire for another promotion challenge but the club currently lie bottom of the table on goal difference.

Holdsworth says his player recruitment, which has seen him bring in eight players on loan this season, is a direct result of having to juggle the club's finances.

"Sometimes you have to be an accountant as [well as] a football manager," he added.

"It does come down to money.

"When you come to a club to a club with financial constraints in the division, it was always a challenge to make sure we were a League club. I want to carry on that.

"The only way forward for a club like ours is loans. We don't have the finances for 52-week contracts but we also have to be realistic to know what sort of players we are going to bring in.

"We need to bring in players who need to have a point to prove and need to perform."

The Shots have scored the fewest goals in the Football League, with 12 in 17 matches, and Holdsworth says rectifying that is his current priority.

"There's no way of being dishonest about it," he said.

"I work heavily on the forwards' goal-scoring during the week. I probably over-do it but I want them to be confident.

"We haven't achieved what we want to in front of goal at the moment. That can turn."