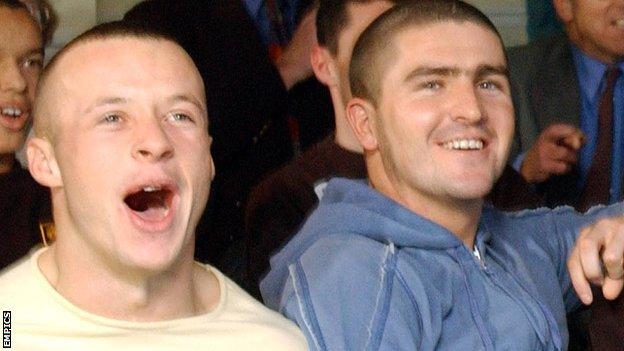 Luke Rodgers has a double incentive for wanting to get on target for Shrewsbury Town against MK Dons on Tuesday night.

Not only is Rodgers still waiting for his first goal since returning to Shropshire, he will be up against his best friend Ryan Lowe - his old team-mate both at Shrewsbury and Crewe.

"He's a good player. He's my best mate and I love playing against him," Rodgers told BBC Radio Shropshire.

"And the banter's started already. He's been on the phone already this week."

Rodgers and Lowe were both part of the Shrewsbury team that dumped Salop old boy Dave Moyes' Everton - and a young Wayne Rooney - out of the FA Cup 10 seasons ago.

And they were together for almost five seasons at the Gay Meadow before linking up again at Crewe.

Although Lowe, 34, left Shrewsbury for Chester in March 2005, followed by Rodgers who joined Crewe four months later, they were reunited when Lowe moved on to Gresty Road in May 2006.

Lowe has had an in-and-out 15 months since his August deadline-day move from Bury to Sheffield Wednesday in 2011.

He had to wait two months for his first start after being injured just half an hour into his debut, but Rodgers insists that Lowe is a player who has matured with age.

"He's kicked on," said Rodgers. "If you look at his record, his last four years have been his best.

"He did really well at Bury and then got his move to Sheffield Wednesday, then got another move to MK Dons.

"I'm really pleased for him. He's only been there six months and there's a lot more to come."