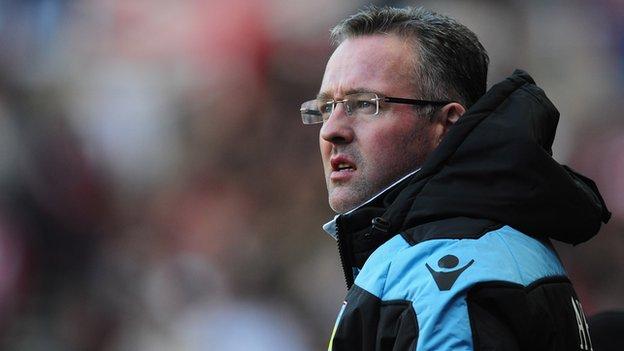 Aston Villa manager Paul Lambert insists he will continue to invest in youth at the club and is confident his side will improve.

Lambert spent heavily in the summer on young players as part of a long-term plan for the Premier League side.

It was a formula that brought success at his previous club Norwich but Villa have struggled so far this season and sit 17th in the Premier League.

"It's my way. I'll not deviate from my way," said the Villa manager.

"You speak to other managers and take advice from them. It would always be my decision. Yes, I love to win but the project is long term."

Villa have brought in Christian Benteke, Matt Lowton, Joe Bennett, Ashley Westwood and Jordan Bowery this summer who are all 23 or under.

Ron Vlaar, Karim El Ahmadi and Brett Holman were Lambert's only signings over that age since he took charge of the West Midlands club in June, but the Scot is confident his young side will come good as they prepare to face big-spending Manchester City on Saturday.

"I know I need to get results but I'd rather a team that is giving everything," he said. "I think they are all growing into it, the young lads. If you look at the average age, it is a very young side but that is great for the future.

"If we keep growing together, we'll have a right strong side. I couldn't ask for any more, not just the effort but the way they have played."