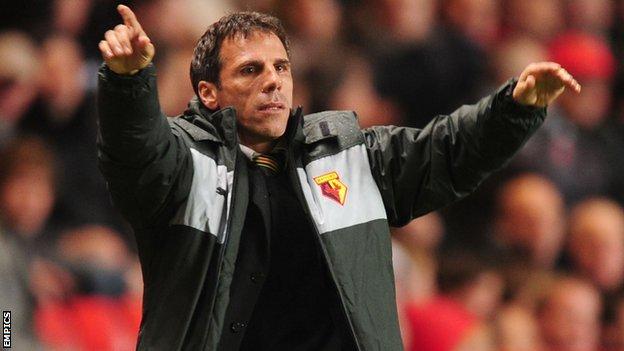 Watford boss Gianfranco Zola has said his side are ahead of schedule in their development, despite the influx of foreign players and youngsters.

Zola has made 16 signings since becoming manager in the summer, 12 of whom came on loan from either Spanish side Granada or Italian club Udinese.

"I have to say it's coming along well," he told BBC Three Counties Radio.

"Considering all the difficulties through the season, I wouldn't expect them to be at the stage they are."

The former Chelsea striker has conceded and give playing time to a mixture of overseas players and domestic talent.

But two wins from their last three games, including have raised hopes the Hornets can climb from 12th in the Championship and challenge for promotion.

"Many of the players are not getting minutes on the pitch and they are all positive and train with the right attitude," Zola added.

"They are brilliant. Many of them deserve to play but unfortunately they can't get games. But their attitude is excellent.

"We are a team with a lot of young players and we have a lot of players from abroad. We are all learning about the Championship. Fortunately we are learning quite quickly.

"I don't know the capabilities of this team. I don't know exactly where we can get to - whether we can get mid-table or the play-offs or whatever. I'm finding out more and more about my team day by day.