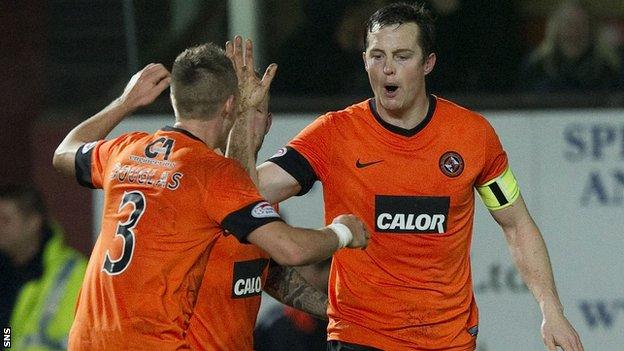 Manager Peter Houston was pleased to see Dundee United hit back to earn a draw with Kilmarnock but was frustrated by his side's defending.

"The players showed excellent character to come back from 2-0 and 3-1," he said after the 3-3 thriller at Tannadice.

"But we can't keep giving teams two goals of a start and hope to come back. When you score three goals at home you expect to win.

"We played some great stuff in the second half and deserved to win."

Kilmarnock led 2-0 at the interval thanks to two great finishes from Cillian Sheridan and Paul Heffernan netted for the visitors shortly after Gary Mackay-Steven had lashed in a wonderful strike.

But he was upset to hear the crowd voicing their displeasure.

"There was some stick coming from the supporters which I have to say was a bit disappointing," he explained.

"We played some really good football and scored some goals to match.

"I expect a bit more support to be honest when you see eleven guys out there fighting for the cause the way they did."

The Tannadice boss was also unhappy with referee Alan Muir's handling of a hugely entertaining match.

"The first one was a great goal from Cillian Sheridan but it's not a foul [for the free-kick]," he lamented. "Sean Dillon has won the header.

"I need to be honest and say one or two of the decisions baffled me.

"Johnny Russell was clear down the wing in stoppage time and he was wiped out [with Liam Kelly earning a caution]. That was a straight red.

"I don't want to see players sent off but it was cynical.

"We need to get decision-making right and I was disappointed with a few of the decisions."