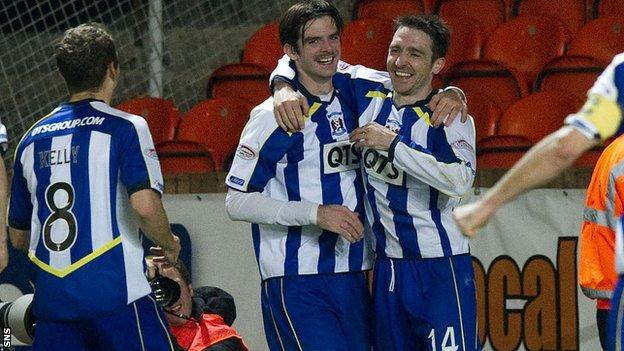 "It's unfair to Dundee United to say we squandered the lead," he explained. "They threw everything at us.

"We didn't play much football because we knew we would need to fight and battle. Because of the atmosphere we had to go in there and compete.

"To come away from here with a point is a fantastic achievement. I thought both sets of players were fantastic."

Killie led 2-0 at the interval thanks to two wonderful goals from Cillian Sheridan and were 3-1 up after Paul Heffernan's header had cancelled out Gary Mackay-Steven's strike.

But United piled on the pressure and were rewarded by a double from skipper Jon Daly, who completed the scoring in stoppage time.

"We had to match how committed United are and our boys deserve so much credit," added Shiels.

"They are a fantastic team, we can't overlook that and they were hurting us with their wing play.

"The referee did well when players were rolling over looking for penalties.

"But take nothing away from United, they deserve their draw

"We play a bit open, which is a weakness, but we want to entertain. We kept two up front for the whole match, with support players.

"The players gave everything they had."

While Shiels was effusive in his praise for the home side, he was angry with United midfielder Willo Flood for claiming he called them a long-ball team the previous time the teams met earlier this season.

He asked: "Why do you need to tell lies to garner motivation?

"I'm hurting about that because I've never said anything bad about Dundee United."