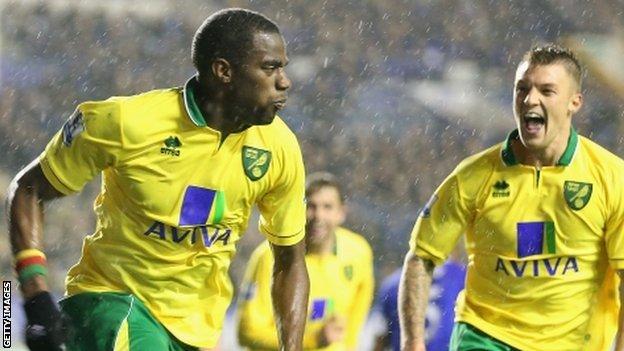 Steven Naismith put the Toffees ahead early on, powering into the roof of the net after good work by Bryan Oviedo.

But Everton faded after their bright start and Norwich began to threaten.

Robert Snodgrass had a shot cleared off the line and Anthony Pilkington went close, before Bassong met Javier Garrido's free-kick to snatch a point.

Everton were unhappy with the decision that led to Norwich's equaliser, with referee Mike Jones spotting a push on Steve Morison by Leighton Baines.

But in truth the Toffees only had themselves to blame for their failure to turn their early dominance into more goals, and for allowing Norwich back into the game.

Everton remain fifth in the table, having drawn five of their last seven games, but they are three points behind fourth-placed Chelsea having played a game more, and they will know they have wasted another opportunity to close the gap on the sides above them.

David Moyes's side certainly began the game well enough, and were first to threaten when Sylvain Distin found Naismith with a long diagonal ball and he teed up Leon Osman to curl a shot wide.

The home side kept the pressure up and took the lead after 12 minutes.

Steven Whittaker was unable to deal with Thomas Hitzlsperger's lofted pass down the left, allowing Oviedo to cut in and find Naismith, who buried his first-time strike.

Bassong finds the back of the net

Sebastien Bassong's header was his first goal for Norwich, and his first since he scored for Tottenham in a 1-1 draw with Birmingham on 4 December 2010.

That was only the second goal a newly resolute Norwich side had conceded in a run of three wins and two draws in the league since a 4-1 defeat by Chelsea on 6 October.

But more looked likely to quickly follow, with Everton's midfield dominating thanks to some quick-fire passing. Further chances duly arrived, with Baines forcing Ruddy into a fine low save from the best of them.

In contrast, Norwich did not test Tim Howard inside the first 30 minutes, but things began to change when Grant Holt went on a rampaging run, battling past two defenders before screwing his shot wide.

The Toffees got lucky before the break when Bassong met a Snodgrass corner but saw the ball come off his shoulder and bounce wide.

And, having seen his side surrender a first-half lead in their defeat by Reading last week, the alarm bells were surely ringing for Moyes as his side made a sluggish start to the second period.

Norwich, meanwhile, were growing in confidence. Pilkington forced Howard to scramble across his goal to keep out his free-kick and the Toffees keeper was fortunate when he flapped at Whittaker's through-ball but got just enough on it to deny Grant Holt.

Holt was involved again when he set up Snodgrass to fire in a shot which was hacked off his line by Johnny Heitinga, while Howard did well to keep out a Pilkington header after being initially wrong-footed.

Baines offered Everton some respite, embarking on a dazzling solo run that ended when Ruddy pushed away his shot, and also firing narrowly over from a free-kick.

But Norwich continued to press and got their reward right at the end of the game.

Baines was penalised for the merest of touches on Morison and Bassong met Garrido's delivery at the back post, his header coming back off the bar and bouncing in, with Holt waiting to knock it over the line if required.

Everton manager David Moyes was unhappy with the decision that led to Norwich's equaliser: "I thought Steve Morison mis-kicked the ball in front of us and I don't think it was a free-kick.

"It was a tough game but we should have seen it out and I am disappointed to concede a goal.

"We had the opportunities to make it 2-0 but Norwich were always knocking on the door and their form has been very good of late so we knew it was going to be a tough game and it proved to be that.

"We played some excellent football in the first half, particularly the first 25 or 30 minutes and maybe we could have capitalised a little bit more.

Norwich boss Chris Hughton: "We know the things we have to do to get points in the Premier League, and games do not get any tougher than having to come to Everton, who are on a really good run.

"But we are on a good run ourselves at the moment and where I was delighted today was that, at 1-0 down, we always looked a threat.

"The game was very scrappy at times but it is always very pleasing when you score that late. It really is a valuable point for us.

"After five or six games we were not doing too well but our form was not actually that bad - we just were not able to pick up the points we would have liked.

"The pleasing thing for us now is that there are now points coming with our performance."