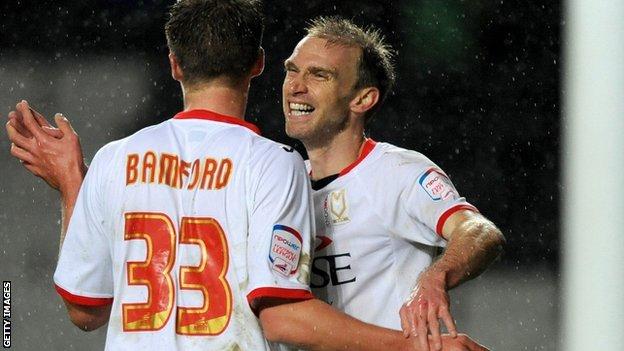 Chadwick latched onto Patrick Bamford's pass for the opener and Shaun Williams doubled the lead from the spot after Tom Eastman felled Bamford.

Jon Otsemobor headed in from a corner after the break before Ian Henderson scored a consolation from 12 yards.

Chadwick took his second, Graham Massey saw red for a tackle on Adam Chicksen, and Ryan Lowe curled in from 22 yards.

"We always thought we had a chance with this crop of players but I was always fearful that when teams pressed us we didn't have a threat in behind.

"I think over the course of the last three or four weeks we've added three young players in Ibra Sekajja, Patrick Bamford and Zeli Ismail who have got plenty of pace and you've seen that today.

"They're frightening when they open their legs.

"That was on top of a fantastic back four, a tremendous midfield and an ever present Luke Chadwick."

"It could have been 10. After the first goal went in, it's probably the easiest game they've ever had at this place, which is desperately disappointing for us.

"I expect effort, commitment and work-rate, they didn't get close enough. We just lost our concentration and when you do that against a team as good as these you are going to get punished.

"We got what we deserved. We've had a frank conversation in the dressing room, that's putting it politely. It has to stop, we are now showing relegation form.

"It's evident when you don't have (leadership) against a team like this you are going to get ruined. They taught us a footballing lesson."